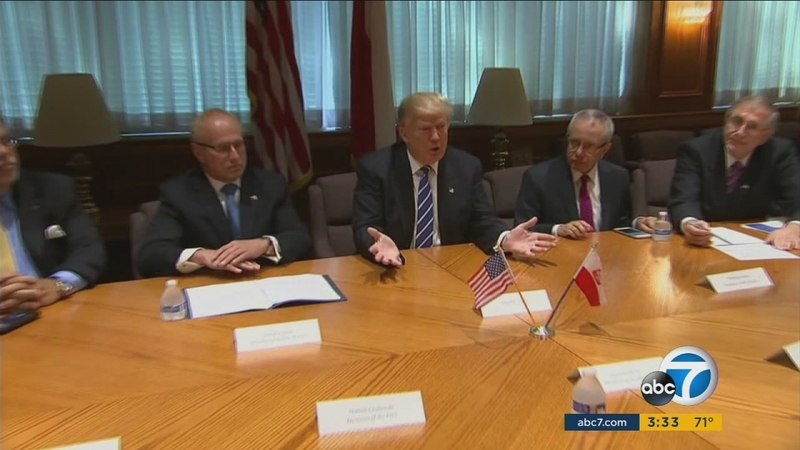 NEW YORK -- Japanese Prime Minister Shinzo Abe said he believes Donald Trump is a leader in whom he can have great confidence after meeting with the president-elect Thursday.

Abe, who became the first world leader to meet with Trump since his election, was seeking reassurances over the future of U.S.-Japan security and trade relations. He described the meeting as "really, really cordial" but offered few details of their discussion.

"I do believe that without confidence between the two nations (the) alliance would never function in the future and as an outcome of today's discussion I am convinced Mr. Trump is a leader with whom I can have great confidence in," Abe said at a press conference following the meeting, where he took only two questions.

Abe said the meeting renewed his conviction that he would be able to establish a relationship of confidence with Trump.

Abe met with Trump in New York, where the incoming president is working on setting up an administration after his surprise election victory last week that has injected new uncertainty into old U.S. alliances. The Trump transition team provided no readout of the meeting.

Trump's campaign rhetoric caused consternation in many world capitals, including Tokyo. He has said he would demand that allies such as Japan and South Korea contribute more to the cost of basing U.S. troops in their countries.

Such comments have worried Japan at a time when the threat from North Korea is rising, and China is challenging the U.S.-led security status quo in the Pacific.

The State Department has said it had yet to hear from Trump's transition team, raising the prospect of the Republican holding the meeting with Abe without any input from career diplomats with deep experience dealing with Japan.

"I conveyed my basic views on various issues to Mr. Trump but with regard to more of the specifics or details, because of the fact that Mr. Trump has not assumed the office as the president of the United States or today's discussion was an unofficial discussion, I'd like to refrain from touching on details," Abe said, adding that they agreed to meet again for a deeper discussion on a wider range of issues.

Both Japan and South Korea already pay considerable sums to support the U.S. bases, and note that it's also in America's strategic interest to deploy troops in the region.

Trump has suggested that Japan and South Korea could obtain their own nuclear weapons, rather than rely on U.S. deterrence, which risks triggering an atomic arms race in Northeast Asia.

South Korea currently pays more than $800 million a year - about 50 percent of non-personnel costs of the U.S. military deployment on its soil - and is paying $9.7 billion more for relocating U.S. military bases, according to the Congressional Research Service. Japan pays about $2 billion a year, about half of the cost of the stationing U.S. forces.

The Japanese leader may also try to sway Trump on the Trans-Pacific Partnership, a 12-country trade agreement that the president-elect opposes. The pact was championed by President Barack Obama, and Trump's victory has all but erased hopes of its early ratification by the U.S. Congress.

The pact is expected to be discussed in a side meeting at the annual summit of the Asia Pacific Economic Community in Peru, where Abe heads after New York. Obama will also be at APEC.

Abe is Japan's most powerful leader in a decade, and he has invested political capital in overcoming strong domestic opposition to the TPP. He has also sought to increase the international role played by Japan's military, which is constrained by a pacifist constitution.