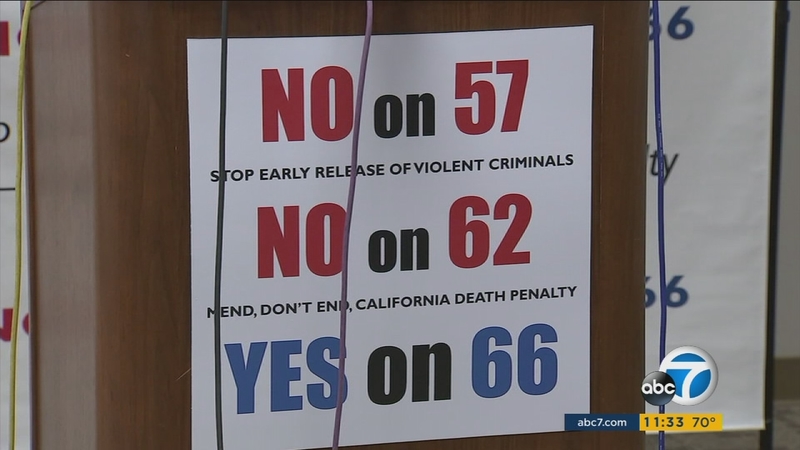 SAN DIMAS, Calif. (KABC) -- Voters will be tasked with deciding on several measures during Election Day on Nov. 8, including measures that could have an impact on public safety.

Los Angeles County Sheriff Jim McDonnell and other law enforcement officials voiced their opposition to Proposition 57 and 62 and their backing of Proposition 66 on Tuesday.

Proposition 57 would increase parole chances for felons convicted of non-violent crimes. Those for the measure believe it would reduce overcrowding in state prisons and save money spent on non-violent offenders.

Those against the ballot measure argue it would release a greater number of convicted felons onto the street.

"Prop. 57, billed as the Public Safety and Rehabilitation Act of 2016, don't be fooled by that," McDonnell said. "We all believe in rehabilitation, giving someone a second chance, but public safety comes first. The focus has been on inmate's rights instead of victim's rights."

"I beg of you, do not vote for this proposition. It's bad, bad, bad," Millie Owen said. "You're only putting your own families in jeopardy. Please don't let what happened to my son happen to your son."

McDonnell also voiced his opposition to Proposition 62, which would eliminate the death penalty.

Those for Proposition 62 state it would save the state millions of dollars and make sure that no innocent person is executed.

Those against the proposition state the death penalty is needed for the most serious of first-degree murderers.

Those for the measure state it would make the appeals process for death row inmates quicker and less complicated, while saving money and making sure justice is carried out in a timely manner.

MORE: California's choices for death penalty in 2016 are end it or speed it up