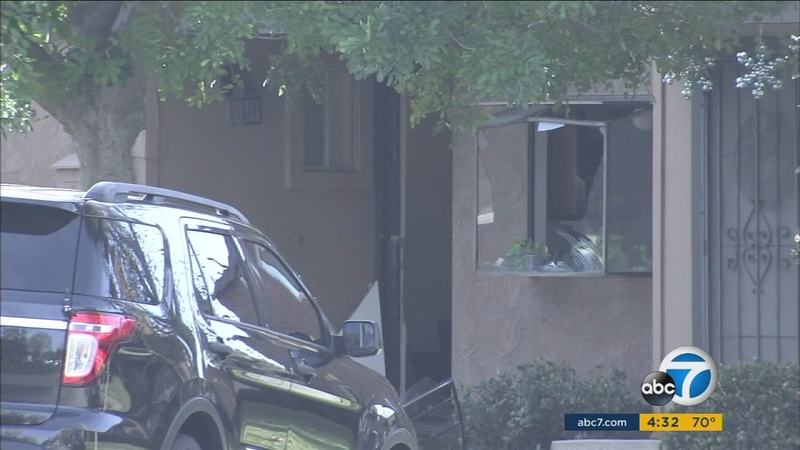 REDLANDS, Calif. (KABC) -- Twelve pipe bombs and ammunition were found at a Redlands home rented by the San Bernardino mass shooters accused in Wednesday's rampage at the Inland Regional Center.

The door frame of the home, located in the 50 block of North Center Street, was twisted and windows were busted out during overnight searches conducted by investigators with the FBI and local law enforcement agencies.

In addition to the dozen pipe bombs, hundreds of tools for making more such explosives, and over 3,000 more rounds of ammunition were also discovered at the home, Police Chief Jarrod Burguan said in a grim morning-after inventory that suggested Wednesday's bloodbath could have been far worse.

"There were another 2,000 nine-millimeter rounds found at that house, over 2,500 223 rounds, and there were several hundred long rifle rounds that were found there," said San Bernardino Police Chief Jarrod Burguan.

Also, police confirmed that a dark colored sedan parked outside the home was searched overnight. The vehicle was seen with its doors, hood and trunk open. Investigators have not said what, if anything, was found during that search.

The location of the Redlands home was given to police in a tip Wednesday that ultimately led to the shooting and the killing of the two suspects, Syed Rizwan Farook, 28, and his wife Tashfeen Malik, 29.

It's not clear who owns the home, but authorities confirmed that Farook and Malik were listed on the home's rental agreement. However, investigators stressed that it's not clear whether or not the two actually lived there.

Wednesday night, Redlands police, SWAT, FBI and other law enforcement agencies served a search warrant at the home. Robots were spotted going inside the location and explosions were heard going off as authorities surrounded the area.

"Couldn't believe it. I was just like in awe that it's happening four houses down my property and that they were potentially my neighbors, and who knows what else could happen at this point?" said one resident who wanted to be identified only as "Aida."

Area resident Frank has lived in this community for 20 years and has watched the events unfold cross the street over the last 24 hours - right from its terrifying start.

"I drove up and I looked out my window, and there was a policeman on the ground behind a tree, lying on the ground with his gun pointed this direction, up toward the direction actually of where they are now," he described.

One neighbor was working in San Bernardino across the street from the Inland Regional Center when bullets began to fly, and came home to get away from the dangerous situation only to find the investigation on his street.

"It's really disheartening and scary because this little sleepy town," said resident Faith Sanders. "We don't have this kind of thing happen in our town."

Farook and Malik were dressed for battle and heavily armed when they opened fire at a holiday luncheon hosted by the San Bernardino County Health Department at the Inland Regional Center on Wednesday, killing 14 and injuring 21 others.