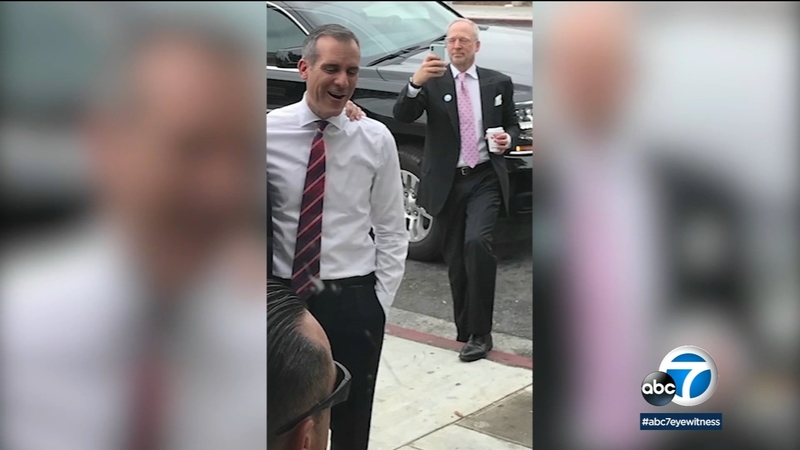 LOS ANGELES (KABC) -- Saying his testimony can be "extremely probative,'' a judge ruled Thursday that Mayor Eric Garcetti must testify in a deposition brought by a Los Angeles police officer who sued the city, alleging he was subjected to repeated acts of sexual harassment by a former mayoral
adviser.

Los Angeles Superior Court Judge Ruth A. Kwan said that while she understands Garcetti is in charge of the second largest city in the nation during a pandemic, she would like the first part of the questioning of the mayor by Officer Matthew Garza's attorneys to take place sometime in January.

"It's extremely probative and he should be deposed,'' the judge said.

Garza filed the lawsuit July 13, alleging sex and gender harassment. According to Garza, from October 2013 until October of 2019, he was assigned to the LAPD's police protection unit for the mayor. He says he was required to drive Garcetti to and from mayoral engagements and accompany him on out-of-town trips and that former mayoral adviser Rick Jacobs often accompanied them.

Rick Jacobs, a longtime advisor and former deputy chief of staff to Mayor Eric Garcetti, is stepping away from political work with the mayor after sexual harassment allegations.

Garza alleges Jacobs -- who hasn't been a city employee since 2016 but still was doing political and nonprofit work for Garcetti -- subjected him on "hundreds of occasions to unwanted and unwelcome sexual comments and touching,'' including tight hugs and shoulder rubbing.

In their court papers, lawyers for the City Attorney's Office maintained Kwan should deny the motion because Garcetti has no "personal factual information'' about the allegations and Garza's declaration contains only vague allegations.

Garza and his attorneys have said there are "dozens of witnesses'' who will support his argument that the city knew or should have known of Jacobs' alleged misconduct, according to the papers submitted by the City Attorney's Office, which say it's patently evident ... that the mayor's testimony is available through other sources ... Mr. Jacobs and (Garza) himself.''

But Kwan said she believed the city's argument was "not well-taken.'' She said Garcetti is alleged to have been the only eyewitness to some of the alleged transgressions by Jacobs toward Garza and that an issue in the case is whether anything was done to stop the alleged misconduct.

Garza's attorney, Gregory W. Smith, told Kwan he plans to ask the mayor about his professional relationship with Jacobs, as well as if he is aware of any other complaints against the former aide.

Garza submitted a sworn declaration in support of the motion to compel the deposition, in which he said Garcetti "was present on numerous occasions when Jacobs subjected me to these unwanted comments and touchings, including on occasions when it was only the mayor, Rick Jacobs and myself in a vehicle, as would be the case when I was driving the mayor somewhere and Jacobs was accompanying the mayor to his destination.''

Garza maintains that on multiple occasions when he was driving, Garcetti was seated in the front passenger or back seat of the car with Jacobs. The officer alleges that Jacobs massaged his shoulders, told him he was strong, commented about having rough sex'' with his gay partners and spoke about his preference for younger men.

"Mayor Garcetti, who directly observed this inappropriate behavior, never took any action to stop Jacobs from touching me or making these comments,'' Garza says in his declaration. "In fact, on many occasions I heard Mayor Garcetti laugh in response to Jacobs' comments...''

The plaintiff's motion to compel Garcetti's deposition was originally scheduled to be heard Jan. 28, but Garza's lawyers convinced the judge to hear it a month earlier in case the mayor was given a position in the administration of President-elect Joe Biden, who will be inaugurated on Jan. 20.

Jacobs took a leave of absence from his job in October after journalist Yashar Ali - who used to work for Gavin Newsom when he was mayor of San Francisco - accused Jacobs of roughly a dozen instances of sexual assault over a 10-year period from 2005 to 2015.

"I take seriously all allegations of harassment. Rick Jacobs has stepped away from his non-profit and volunteer political work," Garcetti said at the time.

Jacobs also issued a statement: "For the past seventeen years, I have dedicated myself to advocacy and public service. I do not want this to be a distraction. Therefore, I will take a leave from my non-profit work and my volunteer political work with the Mayor."

That came after Ali detailed his own alleged experiences with Jacobs.

1. BREAKING: 24 hours after I published this story, @ericgarcetti has issued this statement about his top advisor Rick Jacobs:

"I take seriously all allegations of harassment. Rick Jacobs has stepped away from his non-profit and volunteer political work." https://t.co/iNGhYGon6H

"He would forcibly kiss me on the mouth, on the lips and he would do this thing which I hate to call a hug because it's not a hug. It was like he was interested in crushing the life out of you. My body language was enough to give an indication of how unwanted his behavior was," Ali said.

In a statement, Smith said "As this lawsuit progresses, we believe more victims will feel the moral obligation to come forward and speak the truth. Yashar Ali is only the most recent victim to speak out. Every person should feel free from fear and intimidation when reporting sexual assault and harassment, especially in the workplace."

After the Garza allegations surfaced, Jacobs called them pure fiction and Garcetti's spokesman said the mayor has zero tolerance for sexual harassment and did not witness the behavior Garza alleges.

But in August, Garcetti stood by Jacobs, calling him a committed public servant who should continue working for the mayor's fund while the case is litigated.