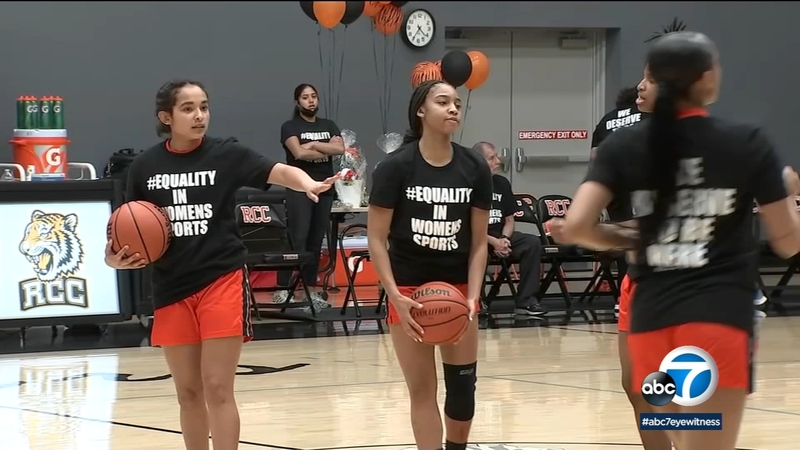 RIVERSIDE, Calif. -- At Riverside Community College, the women's basketball team chose to make a bold statement during their final game of the season.

The players and coaches all wore T-shirts bearing the hashtags "Equality in Women's Sports" on the front and "We deserve to be here" on the back.

"Picking up the torch for anybody and speaking out takes a lot of courage," said RCC women's basketball head coach Alicia Berber. "I am just absolutely proud of my team and the courage that they've had to speak on this issue."

At issue, the team is shinning a light on what they say are discrepancies with access to the weight room and harassment they received from male athletes by demanding it.

"This has been an ongoing problem that I've seen my whole life that I feel should have been changed by now. So, I really want to force action so it is not like this for the next generation or my children," said team captain Elizabeth Lau.

"If issues are brought forward, we as an institution will come together and we will work to resolve those issues in a really positive way," said Riverside Community College District President Gregory Anderson.

Anderson said the college is dedicated to strengthening its commitment to Title IX.

"They are courageous to share their concerns," he said.

Legendary Hall of Fame basketball player Cheryl Miller was in attendance to lend her support to the team and spoke about the 1972 law's impact on her and women athletes.

"Before you almost had to suffer in silence when I was playing, but these young ladies they have a voice and they are willing to raise it and speak up," Miller said.

The team's outspokenness on the issue of equity has gained attention statewide. During the California Community College Championship, players and coach asked Berber to send them T-shirts.

She delivered 463, which the final eight teams wore during their warmups.

"Nobody really knows what Title IX is unless something actually happens to them and it's brought to the forefront," Berber said.

ABC Owned Television Stations and ABC's Localish present 50 inspiring stories from around the country for Fifty/50, as part of The Walt Disney Company's monumental initiative highlighting the 50th anniversary of the passing of Title IX, the federal civil rights law that prohibits sex-based discrimination in any educational institution that receives federal funding, and gave women the equal opportunity to play.