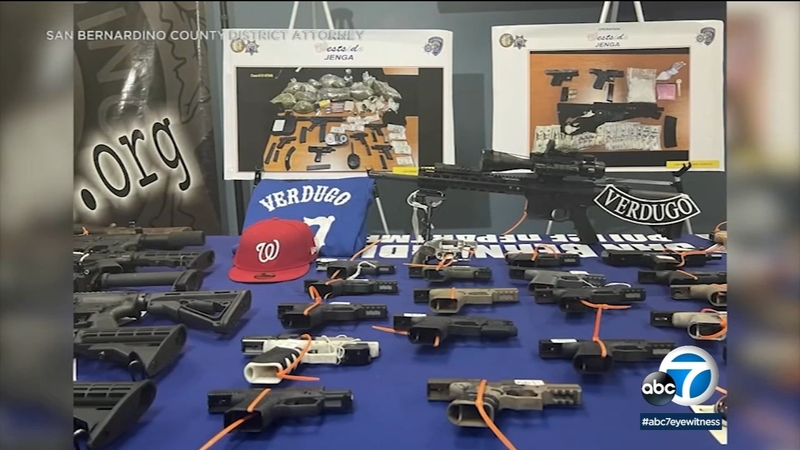 SAN BERNARDINO, Calif. (KABC) -- An investigation into the trafficking and distribution of weapons led to a multi-law enforcement agency takedown of a San Bernardino gang with a history of violence and crime throughout the Inland Empire.

"The people of San Bernardino can go to bed tonight knowing that their communities are safer," said California Attorney General Rob Bonta during a press conference on Thursday.

In June, the San Bernardino Police Department requested assistance from the California Department of Justice's Special Operations Unit to investigate the gang's activities.

For the second time in less than a week, another big takedown of an Inland Empire street gang took place in San Bernardino on Friday.

The Special Operations Unit along with other local law enforcement and the district attorney's office made 180 felony arrests, shut down 30 illegal gambling establishments and seized 92 handguns, 19 assault weapons along with cash and illegal drugs.

"Throughout this investigation, numerous violent crimes were prevented, were intercepted, including shootings and armed robberies, and evidence collected during the investigation also assisted in solving two homicides in the area," said Bonta.

The scope of the seizure and arrests demonstrate what officers are faced with as they fight to lower crime.

"Not only is the community dealing with violent crime, but our officers are facing an increase number of assaults. They are facing more heavily armed more dangerous suspects," said Green.