The suspect had allegedly trespassed on the school campus and had incendiary devices in his car.
KABC
By David González 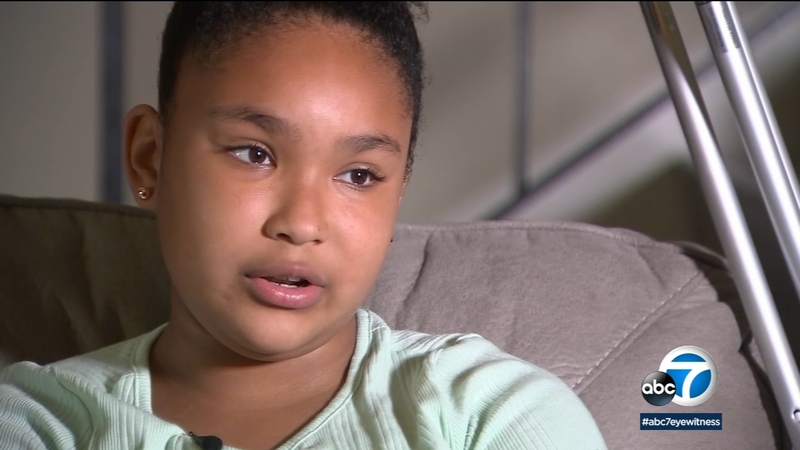 SANTA ANA, Calif. (KABC) -- The family of three Taft Elementary School students who were hit as they walked to class last week are reliving the pain and anguish they're currently dealing with.

"In my opinion, I don't really think we had any time to react," said 11-year-old Sophia East.

Sophia was walking to school with her grandparents and four cousins on Monday, May 23.

Sophia's right leg is now in a cast and on the mend after she was struck. She and her two cousins were injured in the hit-and-run.

"I realized very quickly that we got hit and that we were on the ground," she said. "My whole body was hurt. I didn't really know it was my knee, but I was really hurt on my legs and I was sleepy."

Santa Ana Police said the driver, 26-year-old Jason Guzman, had allegedly trespassed into the school and had been escorted off campus.

They said Guzman allegedly barreled straight into the students.

"After he hit them, he crashed into another car, and went about another half a block and stopped," said Jesus De La Torre, the girls' grandfather. "He got out through the passenger door with what I thought was a blade or a knife."

Video captures a driver moments before several kids were struck by his car near an elementary school in Santa Ana.

Sophia said she was scared.

"I didn't know what else to do because I could not get up," she said. "I thought he was going to come do something to us, but people started surrounding us and he got scared and I don't know where else he went."

De La Torre said he thought his grandchildren were dead.

"I went and picked up Victoria, the youngest one because I thought, 'This is where it ends,'" he said.

Victoria spent her 7th birthday on Friday recovering from skull and pelvic fractures.

Her mom, Daisy De La Torre, said it's been hard to see her daughter in such pain.

The family's attorney, Atticus Wegman, said the physical wounds will soon heal, but it will take some time to fully recover from the mental and emotional anguish they've suffered.

"This has been a nightmare for the De La Torre family, and it's really hard to describe what they went through and then the aftermath," said Wegman.

Sophia said she has anxiety over the incident.

"I'm kind of scared of walking now because I don't know what's going to happen," she said.

However, what she does know is that her and her family will get through this together.

"Family just makes everything better for me," Sophia said.

Guzman is set to be arraigned on Friday, June 10.

He faces a maximum sentence of 49 years to life plus six years in state prison plus one year in Orange County Jail if convicted on all counts.