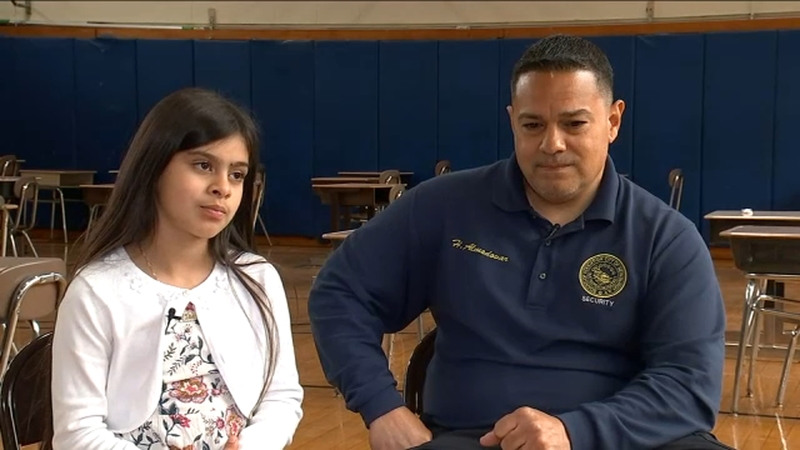 NEWBURGH, New York -- A security officer in Orange County is being hailed as a hero after helping a young girl who was choking.

This week, Ariana Miranda enjoyed lunch alongside the many other students at Balmville Elementary School, in a scene similar to last Tuesday when the energetic fifth grader downed a rather large and rather juicy piece of orange.

Unfortunately, that slice of fruit got stuck in her throat and she couldn't breathe.

"I didn't try to because I knew, I thought if I breathe in, it could get deeper and it could get harder," Ariana said. "So, I wasn't really focusing on breathing. I was focusing on taking it out."

All that focusing didn't work. That's when security monitor Hector Almodovar took matters into his own hands.

Nine-year-old Robert was in math class when he needed a sip of water. He tried to take the cap off with his teeth, and that's when he started choking. Toni Yates has more on this

"I looked over and I saw a finger, like she was trying to make herself throw up," Almodovar said. "So, I just got up and she couldn't speak, she wasn't talking, she wasn't saying anything at all, so I just did the Heimlich."

He said it took about three pumps and that's when he heard her voice, and the piece of fruit came out.

Where did security monitor Almodovar learn the skills to not only perform the Heimlich maneuver, but also recognize potential danger? He had some training at school, but 25 years as an NYPD housing officer certainly helped.

"Just when I saw her choking and she wasn't responding, I knew I had to do something," Almodovar said. "I couldn't wait."

As soon as an Alvin ISD school bus pulled up to the scene of a fiery crash, three employees jumped into action to call for help and pull victims from cars.

Because of Almodovar's quick response, 10-year-old Ariana now has a clear throat and a grateful heart.

"I knew that if no one acted, this story would take a different turn and maybe I wouldn't be here if it weren't for him," Ariana said.