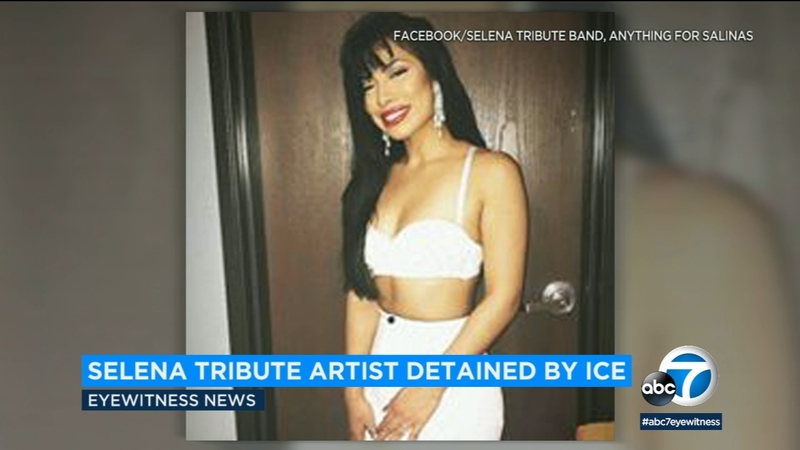 Selena cover singer from LA detained by ICE in Texas

HARLINGEN, Texas -- A popular Selena tribute artist from the San Fernando Valley was detained this week by immigration officials in south Texas.

Karol Posadas, who has portrayed the late Tejano icon for several years with her family band, was released on Friday after being held since Nov. 2.

Posadas, who was born in Guatemala and grew up in the San Fernando Valley, portrays Selena with the band, Anything For Salinas.

On Nov. 2 while traveling on tour in south Texas, she was taken into custody at Valley International Airport in Harlingen.

A GoFundMe page established for the singer's legal defense says: "She has been kept at an overcrowded facility in El Valle, and forced to sleep on the floor, denied access to basic personal care products, and denied medical attention for her heart condition, that jeopardizes her health and for which she needs treatment."

ICE confirmed that it released the singer on Friday.

"On Nov. 8, 2019, ICE released Karol Bala-Posada on an order of supervision. Her immigration proceedings are ongoing," the agency said.

Anything for Salinas was slated to play tour dates in Southern California on Friday and Saturday. But her manager told Eyewitness News that Posadas was "tired and drained" after the ordeal and not likely to perform soon.

Posadas is a DACA recipient from Guatemala who entered the U.S. at a young age, her supporters said.

"It's been an absolute pleasure singing and bringing experience fans never had the opportunity to have. I'm extremely grateful every day," Posadas said on the band's Facebook page.

Her GoFundMe page says "Karol is a DACA recipient, she is an outstanding person, with no criminal record, who was brought to this country by her family at a young age, to escape the dangers and threats of her home country Guatemala."

Selena was fatally shot at age 23 in 1995 but remains a popular figure in Tejano music circles, with tribute bands, Selena-themed cruises and re-releases of her work keeping her legacy alive.