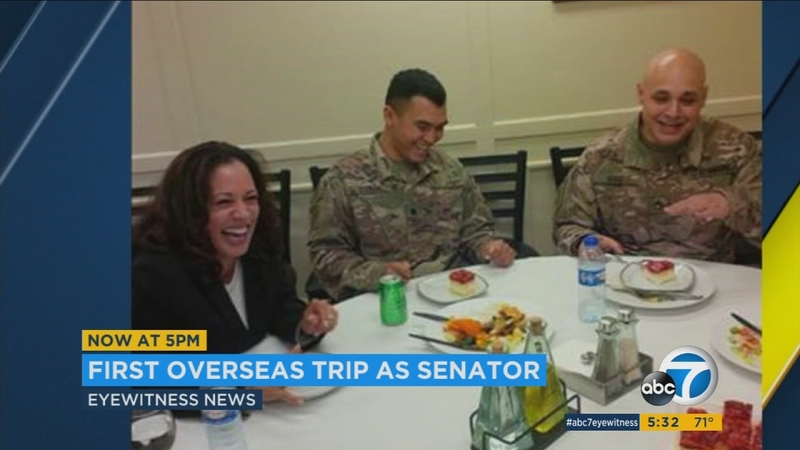 LOS ANGELES (KABC) -- Sen. Kamala Harris is back from her first foreign trip since taking office, a visit to the Middle East to meet with American troops and observe a Syrian refugee camp.

The California Democrat met with troops from California stationed in Iraq.

Last week I traveled to the Middle East to meet with CA servicemembers & other U.S. personnel in the region. https://t.co/69GLtFy3Qo pic.twitter.com/9M47m2o9KH

She then visited a Syrian refugee camp in Jordan. While there, she heard one refugee describe the horrors and violence his family went through, including the death of his daughter.

"When I think about that in the context of a policy we have in our country that says we're going to shut our border to these refugees mostly because of their religion, I am offended and disturbed as I was before if not more so," she said.

The experience, she said, reinforced her belief in the need for more coherent and consistent policies on Syria and refugees.

Harris sits on committees that deal with foreign affairs and security, including the Senate Select Committee on Intelligence and the Homeland Security and Governmental Affairs Committee.

She is planning to hold her first town hall Friday, at Holman United Methodist Church at 2:30 p.m. She is also taking questions via her Twitter account @SenKamalaHarris using #AskKamala.

Still taking your questions for my town hall in Los Angeles on Friday. Tweet them at me! #AskKamala