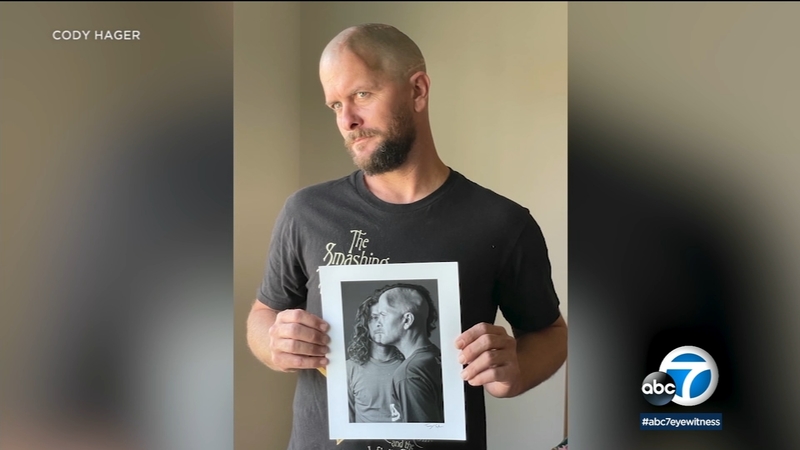 DOWNEY, Calif. (KABC) -- Jared Hager lost half his skull in a traumatic skateboarding accident. But in a remarkable twist of fate, the Southern California man survived to become a medical first.

"The thing that I love about skateboarding is that you're going fast. Just the controlled chaos you have with skateboarding. You want to keep that going," said 37-year-old Hager, a competitive skateboarder.

But it all came to a stop at a reservoir in Palm Springs in April 2019, when Hager was on his way to shoot a skateboarding video with his friends.

"I just went down this hill without even looking at it, which is like a really dumb thing to do," he said. Hager suffered a severe traumatic brain injury.

"At first, I thought he was going to die because he was going purple to white," said his twin brother, Cody Hager.

His brother performed CPR. At the hospital, Hager's brain was bleeding and swelling out of control.

"They said we got to operate on him right now," Hager said, "I kind of woke up from a coma about three weeks later."

Hager soon discovered surgeons had placed his missing skull under his skin near his stomach. Doctors hoped he would be able to use it again. But, the pandemic crushed those plans.

Doctors say what they do isn't new. It's more of a new use for old technology that's approved by the Federal Drug Administration.

"There was so much COVID that elective surgeries were just stopped," said Dr. Charles Liu, director of the USC Restoration Center and Chief of Innovation and Research at Rancho Los Amigos. Once again Hager's world came to a screeching halt.

"I'm not able to work. Me and my brother, we build skateboard parks," he said. The brothers became homeless. They camped, stayed with friends and took odd jobs to survive but Hager's vulnerable scalp was a constant concern.

But just like in a movie, a plot twist. Rancho Los Amigos National Rehabilitation Center researchers were looking for a patient just like Hager to partner with.

A few days before his surgery, Hager's mother, Mary Ellen Young, came to meet her son's doctors. "Today is a great day," she said.

"We're interested in taking care of everybody, irrespective of socio-economic circumstances," Liu said, "How is this not a Hollywood story? For the last couple of years, Hager has been walking around with a piece of skull missing."

This made him a perfect candidate for a revolutionary, new brain-imaging technique called functional photoacoustic computerized tomography, or fPact. It's a collaboration between Rancho Los Amigos, Caltech and USC. It shows scientists the brain's inner workings in real time.

"We're using certain wavelengths that get absorbed by certain molecules. And you can use those acoustic waves to construct an image. What this technology provides is a much more favorable environment to conduct experiments to help us understand human brain function and disease," said Dr. Jonathan Russinm, assistant professor with the USC Neurorestoration Center

The technology can help unlock the mysteries of dementia, Parkinson's Disease and epilepsy.

"There's so much gain from it. So I don't mind donating my brain to science. You know what I mean? It's such a cool compromise," Hager said.

Without a bone barrier, it's easy for researchers to bounce laser beams off of Hager's brain. But, he can't walk around with half a skull forever. The solution was to implant a newly-developed, strong, see-through skull with a built-in lens.

"Jared is the first person to receive an implant that has been specially engineered with a window to allow even more information to be extracted," said Liu.

On surgery day, Hager's mother witnessed this historic event. "Our whole family believes that this was meant to happen," she said. Four days after surgery, Hager's head is whole again.

"Very pretty, very pretty head. This is the best thing I've ever seen. It's really hard to put into words how it feels," his brother Cody Hager said.

It's such a weird feeling because I know that I'm protected now. So it feels like a brand new day," Hager said.

Being able to peer into Hager's mind and to see how therapies and treatments are working in real time is going to be invaluable to scientists. But his identical twin gives researchers a built-in control subject.

"If we can just get Jared's brain to what Cody's is, then that's the target to hit," said Liu.

With his doctor's blessing, Hager plans to get back to skateboarding, but this time he's protecting his skull.

"I haven't worn a helmet for a long time. I'm going to now for the rest of my life," said Hager.

It helps him to know his suffering did some good.

"In hurting myself, the most beneficial thing I did was up their ability to get as much research as possible," he said.
Report a correction or typo
Related topics:
health & fitnessdowneylos angeles countycircle of healthmedical researchresearchscienceskateboarding
Copyright © 2022 KABC Television, LLC. All rights reserved.
CIRCLE OF HEALTH
CDC says US death toll from COVID-19 hits 1 million
COVID cases rising in US; many eligible for booster are uninterested
Mobile vaccine clinic comes to Lynwood amid effort to prevent surge
What is alopecia? Some of those living with the disease speak out
TOP STORIES
Man shot, killed 'without provocation' on NYC subway: police
LA County hospitalizations reach highest number since March
20-year-old killed in San Bernardino shooting remembered as 'good kid'
New video could help police in fatal San Bernardino party shooting
78,000 pounds of infant formula arrives in US
COVID-19, shootings: Is mass death now tolerated in America?
Amber Heard's lawyers try to poke holes in Johnny Depp's libel lawsuit
Show More
Something strange is happening with our universe: NASA
Noah Thompson crowned as the next 'American Idol' in season finale
Snorkeler finds $2,000 dentures in Gulf - reunites with owner
Man found stabbed to death at Thousand Oaks apartment complex
A new billionaire has been minted nearly every day during the pandemic
More TOP STORIES News