Snoop Dogg joins Rams, Chargers to give away turkeys to 2,500 Inglewood residents

Snoop Dogg joined the Rams and Chargers to pass out turkeys to 2,500 Inglewood residents.
KABC
By Ashley Mackey 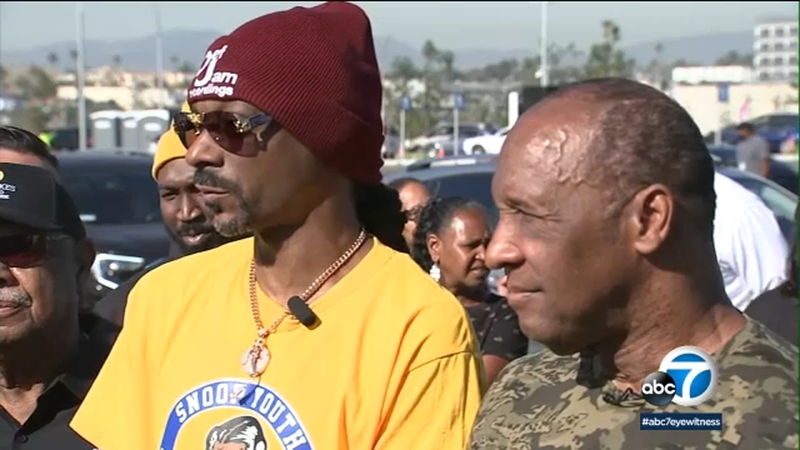 INGLEWOOD, Calif. (KABC) -- The city of Inglewood hosted its 7th annual Turkey giveaway at SoFi Stadium, and the event welcomed a very special guest to help pass out turkeys to Inglewood residents.

Rap legend and SoCal native Snoop Dogg was on hand to volunteer at the event Tuesday alongside the Rams and the Chargers.

"As a kid, I dreamed of a lot of things and to be able to give back was one of the things that I've always dreamed about," said Snoop Dogg. "Because I was a kid that wanted it and had aspirations, so once I became successful and was able to connect with the mayor and connect with a city like Inglewood, to be able to give back annually, and to make sure it really touches the community."

The event was all about supporting the community. Los Angeles Rams DJ Malski had the music going, Rams and Chargers players were handing out food and nearly 180 community volunteers came out to help make the event a success.

"As much as I love playing football, I love being a humanitarian as well," said Terrell Burgess, Rams defensive back. "So, anything I can do to give back to the community is what I want to do."

"We've always had a sense of community," said Inglewood Mayor James Butts. "But what Snoop did is he gave us our celebrity presence, so now the world pays attention to what we do in Inglewood."

And for some Inglewood residents, this was a huge help.

"It feels good because the COVID hit everybody," said Inglewood resident Glendy Castro. "So it's hard, everything's really expensive too, so it's a good thing he's doing for our community."

This is the second year the giveaway has taken place at SoFi Stadium and stadium officials say they have no plans of stopping.