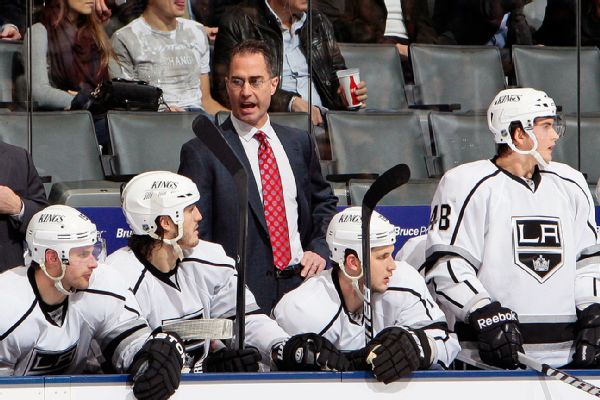 Stevens is moving into the top job with no plans to upend the system in which he played a major part. Instead, he believes he can make a better team out of the same championship-winning core that rose so high and fell so low.

"It's just kind of the nature of our business that sometimes a little change can make a big difference," Stevens said.

The Kings introduced Stevens as the 27th head coach in team history Monday. Stevens was the only candidate considered by general manager Rob Blake, who took over this month after Los Angeles fired Sutter and general manager Dean Lombardi.

The franchise's decision to promote the top two assistants to the two fired architects of the Kings' renaissance seemed odd to many fans who expected a bigger break from the recent past. Los Angeles finished 10th in the 14-team Western Conference this season while ranking near the bottom of the NHL with just 201 goals.

Stevens and Blake say they won't be copies of their former bosses, but they also feel the Kings' recent success shouldn't be discounted because of the Kings' failure to win more than one playoff game in the past three years.

From the front office to the ice, Blake and Stevens plan to offer only tweaks to the Kings' current identity, not a thorough overhaul.

"There was literally no [coaching] search," Blake said. "I went to John as soon as the changes were made and expressed our interest."

After Blake identified improved scoring as the single biggest area of necessary improvement, Stevens sold Blake on instilling a renewed focus on speed and scoring generated by persistent drives to the net for grimy goals.

"Quite honestly, if we lead the league next year in coaches' challenges for goalie interference, I'd be really happy about that," Stevens said.

Stevens also plans to stick with the core principles of defense and puck possession that made the Kings such a difficult opponent for most of Sutter's six seasons.

"I don't know if I can tell you there's a button we're going to push and it's going to change everything," Stevens said. "I think we do an awful lot of good things here. I do think the game has changed a little bit, and we're certainly paying attention to that. ... We do want a team that attacks hard to the net. It's not that we haven't done that before, but it's something that we're really going to focus on."

The 50-year-old Stevens coached the Philadelphia Flyers from 2006-09, reaching the Eastern Conference finals before getting fired. He stuck with the Kings when other teams showed interest in him over the past seven years, adding his experience with Sutter to previous stints with Terry Murray and Ken Hitchcock.

"I try to be a student of the game," Stevens said. "I think early on as a coach, I was a real X-and-O guy. I was going to teach the game as I saw it on the board, and I soon realized that relationships were probably just as important as X-and-O's, and the spirit of your team. [I learned] just how important it is to push your team emotionally and keep them in a good place. That's a part of the game I pay more attention to today than I did 10 years ago."

NOTES: The Kings will not buy out the contract of veteran forward Marian Gaborik, Blake said. The Slovak star played through injuries this season even after breaking his ankle at the World Cup of Hockey. After missing two months, he managed just 10 goals and 11 assists in 56 games, the lowest-scoring season of his 15-year career. Blake said Gaborik had an unspecified medical procedure after the season. He won't be healthy until training camp or beyond, but the Kings will welcome him back. The 35-year-old Gaborik, whose arrival in LA in 2014 partly spurred the Kings to their second title, has four years left on his contract. "Let's say it'll be a clean slate for Marian to come in and prove himself," Blake said. ... Blake will give permission to any team interested in interviewing Lombardi for a front-office position, but no teams have asked yet. That includes the Buffalo Sabres, who fired GM Tim Murray and coach Dan Bylsma last week. "We haven't been contacted at all," Blake said.
Related topics:
sportsespnnhljohn stevensrob blakecoachlos angeles kings
Copyright © 2022 ESPN Internet Ventures. All rights reserved.
TOP STORIES
Orange County confirms 1st presumptive case of monkeypox
Memorial service held for 2 slain El Monte police officers
4 SoCal cities forced to cancel 4th of July fireworks displays
Ex-UFC star Cain Velasquez sues man he claims molested his son
Malibu residents asked to cut water usage by 30%
California late start law aims to make school less of a yawn
USC, UCLA considering move from Pac-12 to Big Ten as early as 2024
Show More
CA gas prices will be even more expensive starting Friday. Here's why
Supreme Court allows Biden to end Trump's 'Remain in Mexico' policy
Accused OC yacht thief is declared a fugitive after failing to appear
Texas woman accused in cyclist death arrested in Costa Rica
Concealed-weapon permit applications on the rise in LA County
More TOP STORIES News