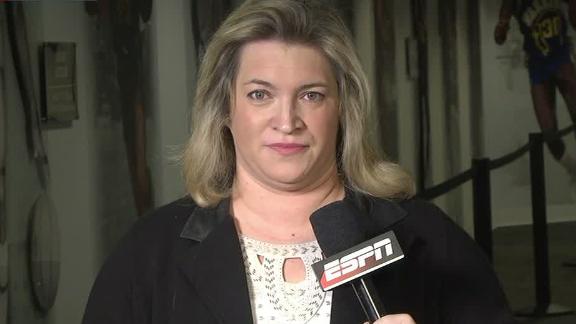 Magic Johnson will return to the Los Angeles Lakers as an adviser to co-owner and president Jeanie Buss as she evaluates the direction of the franchise, the team announced Thursday morning.

"We are thrilled and honored to add Magic's expertise and abilities, and I look forward to working alongside him," Buss said in a statement released by the team.

Johnson has held titles with the Lakers in the past, including honorary vice president, which he resigned from in June. He has also previously owned shares in the team, which he sold to Dr. Patrick Soon Shiong in 2011.

ESPN reported last month that Johnson and Buss had met for dinner at a Lakers game.

In an interview with Spectrum SportsNet on Thursday, Johnson said he is happy to be returning to "an organization that I love," adding that he turned down every other franchise that offered him a role because he has "always been a Laker."

Johnson said he already had meetings earlier Thursday with members of the Lakers organization, including general manager Mitch Kupchak, and is "ready to go to work."

"If [Kupchak] needs to pick my brain on anything, 'cause we talk basketball all the time anyway, Mitch and I," Johnson told Spectrum SportsNet. "Jim Buss, Joey, Jesse Buss -- all the Buss brothers -- if they need me in any kind of way."

Jim Buss, a co-owner and the Lakers' executive vice president of basketball operations, said publicly in 2014 he would step down from his post if the team wasn't a contender within three to four years.

Jeanie Buss has repeatedly said she will hold her brother and Kupchak to that timeline.

Asked for his reaction to Johnson rejoining the Lakers, coach Luke Walton said, "I'm excited, obviously. It's Magic Johnson. He's not only one of the all-time great Lakers, but one of the great all-time NBA players, a champion."

As for the benefit of having Johnson around the team's young players, Walton said, "He's one of the few players that every player automatically respects without even knowing him because of what he's accomplished as a player and the way he's seen the game.

"Having a set of eyes like that, a guy they can talk to about what it's like and what it takes, I'm hopeful it will be good for these young guys."

Johnson, for his part, said that if Walton wants, he is willing to "get on the floor with some of the guys likeD'Angelo [Russell], some of the point guards, and work them out, or just give them advice."

"Or if he doesn't want me to be a part of it at all, it's OK, too. It's up to every individual that works for the Laker organization and how they want to utilize my expertise, and I'm looking forward to it."

Johnson credited Walton for the development of young players like No. 2 overall pickBrandon IngramandIvica Zubac.

"What I want to do is, little by little, build the Lakers back up. We have a great group of young players," Johnson said. "I think we're missing a leader, though. We have to have D'Angelo step up to the leadership role."

Russell said before Thursday night's game against theWizardsthat he would welcome the opportunity to play as much as he can in front of the Hall of Fame point guard and ask for his feedback.

"I want him to watch me practice and give me tips and stuff like that," Russell said.

This sentiment was shared by Lakers guard Nick Young.

"Man, that's Magic Johnson. You can't not be excited about that," raved Young. "He's Showtime. It's Showtime himself, walking around and you can pick his brain and just talk to him."

Lakers forward Larry Nance Jr. praised Johnson as "one of the greatest players to ever play the game."

"You surround yourself with success, good things are bound to happen," Nance Jr. said.

"He is a truly special person and a natural leader with a relentless passion for basketball and profound knowledge of the game," he said.

The Lakers broadly described the role Johnson will play as "advising ownership on all business and basketball matters, collaborating with coaches, evaluating and mentoring players, assessing future franchise needs and helping ownership to determine the best path for growth and success."

Johnson, currently an analyst for ESPN's NBA Countdown, has an ownership stake in the Los Angeles Dodgers and has been close to the Buss family since he was drafted by the Lakers in 1979. Jeanie Buss worked for her father, the late Dr. Jerry Buss, at the Forum in Inglewood during Johnson's playing days.

Johnson, who says he watches every Lakers game, told Spectrum SportsNet he is willing to devote the necessary time to the team, otherwise he wouldn't have accepted the role.

"I'm not a guy who does anything halfway," he said.

In October, ESPN's Outside the Lines asked Jeanie Buss about Johnson's criticism of Jim Buss such as during his appearance on ESPN's First Take in Feb. 2015, whenJohnson questioned whether Jim Buss could turn around the team.

"I don't want to see anyone in my family be criticized, but when you are in a position that I'm in, that my brother's in, that comes with the territory," Jeanie Buss told ESPN. "You cannot be, you know, sensitive to criticism. That just goes with it.

"... I think that that's between the two of them. That's their relationship, and, you know, I think that they understand each other and where they're coming from. Magic has never been a person to hold anything back. That's the way he lives his life with everything he does. And that's what makes him a leader."

Johnson told Spectrum SportsNet that he was going to call Jim Buss later Thursday to set up a meeting.

"Jim is calling the shots and I want him to understand that I'm just here to lend advice," Johnson said, adding that he told the same to Kupchak.

There had been speculation that former Lakers coach Phil Jackson, now the president of the Knicks, would be an option to take over the Lakers. Jackson and Jeanie Buss announced they had ended their four-year engagement in late December.

Sources said that announcement had no effect on or relation to the timeline Jim Buss has set for the franchise or Jeanie Buss's decision-making on it.