SAN FRANCISCO -- The Los Angeles Lakers hardly ever practice, and shootarounds are even rarer for the veteran squad. So getting Markieff Morris, who signed with the team this week after receiving a buyout from the Detroit Pistons, up to speed takes some creativity.

Morris, who played 15 minutes in his Lakers debut Tuesday, extended his run to 19 minutes in the Lakers' 116-86 win against the Warriors, with the extra burn on the board because LeBron James was sitting out because of a sore groin.

As much as the Golden State game was an opportunity for Morris, James' absence also provided a chance for the team to practice playing without him.

Sure, common sense suggests that Los Angeles' title hopes are directly tied to how well James can turn it on in the playoffs. That doesn't mean the Lakers can't aspire to improve upon the precipitous drop-off that happens when James sits -- even if it's just for rest, instead of an entire game like on Thursday.

"I don't really pay attention to those kind of stats. I think when everybody's best player leaves the floor, they might go down a little bit," Lakers backup guard Quinn Cook said when presented with the numbers illustrating James' impact.

Cook cited ancillary reasons why the Lakers struggle without James -- "We get everybody's best shot ... You're going to get crowds that want to see us lose ... We have a big target on our back" -- before spelling out just what James brings to the table that they have to replicate.

"His presence. His IQ. Everything," Cook said. "His scoring. He's the best distributor in the league. So, we get easier shots when he's out there. And just his defensive communication; he's quarterbacking everything, letting everybody know where he needs to go. He can guard 1 through 5. And with the ball, he's just the best. There's a reason why he's the best."

And there's a reason that, even with Thursday's triumph, James' teams are just 15-42 in games he has missed since he left the Miami Heat in 2014.

Even if this season's Lakers are 2-1 without him after the Golden State victory, it's important to remember the Warriors came into the game on a seven-game losing streak and hold the worst record in the league at 12-47.

Still, it was an impressive showing. Thursday marked the 101st time James has missed a game in his career and the first time his team won by 30 or more points without him. The Lakers (42-12) scored 35 points off drives, tied for their most in a game this season, according to ESPN Stats & Information research.

After leading by only two points at halftime, the Lakers blew the game open, outscoring the Warriors 40-17 in the third quarter to render the final period irrelevant.

"Everyone played great," Davis said. "Came in and tried to fill the shoes of a guy who comes in and does it all. Bron, when he's out, he's taking away a lot of things that we do. So it's on all of us to make sure we try to fill those voids, and I think we did that tonight."

Morris didn't eclipse the 10-point plateau, but he was close -- finishing with eight points on 3-for-5 shooting, four rebounds and an assist.

"I think defensively he's getting more comfortable with our coverages, and you saw him knock down two 3s, got him a couple of post touches, another way we can use him," Vogel said. "I think every minute he's out there with these guys gets him more comfortable."

And Morris' presence combined with James' absence meant a bevy of touches for Kyle Kuzmaon the wing. Kuzma responded with 18 points on 8-for-17 shooting and three assists.

"Obviously, LeBron not playing allows me to have the ball, pick-and-roll, but there's certain times when LeBron's not playing where I'm able to do that, when he's not on the court," Kuzma said. "But when he's on the court, you kind of just fall in line and let that kind of dictate."

L.A. still showed some of the same symptoms that have plagued it when James rests during a game, of course; the Lakers on Thursday shot just 8-for-24 from 3 without James creating those easy looks that Cook mentioned. They average only 9.1 made 3s per 48 minutes when Davis is on the court without James, connecting at a 33.7% clip, figures that would rank around the very bottom of the league for NBA teams this season.

And the Lakers turned it over 17 times against the Warriors without the ball running through one of the greatest playmakers in league history, though that paled in comparison to the 27 turnovers they forced against Golden State's hapless offense.

Overall, Thursday night's visit to The Bay was a step forward -- and a testament that competing without James on the court is an area in which the Lakers can and should improve.

"We got to get better at that," Davis said. "Usually when [James is] playing and he comes off the floor, we kind of take a dip in all aspects of the game. Just the way, the same way we played tonight without him, we got to play like that when he's playing but when he's not on the floor.

"It's good for guys to kind of get those reps. And I think when he comes back that we got to make sure we keep the same pace, same intensity, when he's not on the floor." 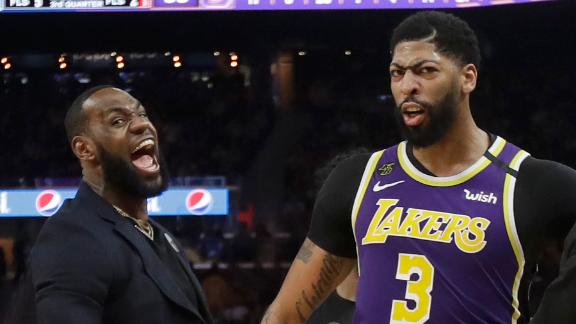 AD, Lakers handle Warriors without LeBron
With LeBron James out due to a sore groin, Anthony Davis powers the Lakers with 23 points to take down the Warriors at Chase Center. 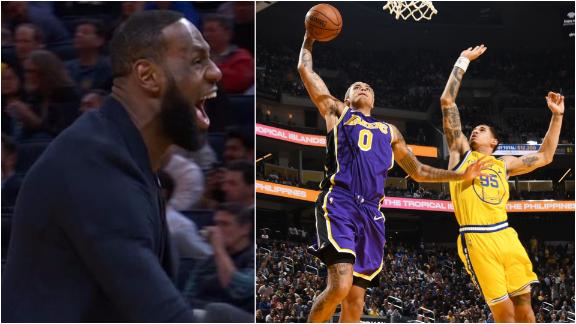