Suspect in custody after 4 killed, 2 injured in rampage of stabbings, robberies across Orange County 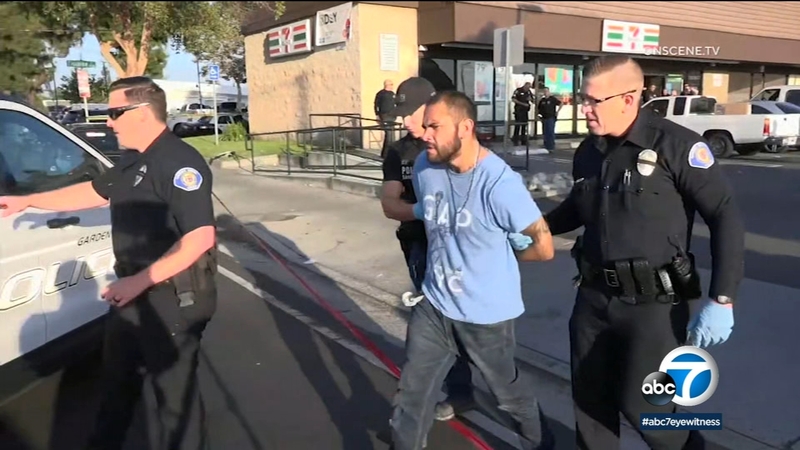 GARDEN GROVE, Calif. (KABC) -- A suspect is in custody after a violent rampage involving a series of deadly stabbings and robberies through Orange County Wednesday, police say.

The stabbings appeared to have no obvious motive other than, in some instances, armed robbery. The suspect was described as "pure evil" and "full of anger."

The Garden Grove Police Department said it started when the suspect, a 33-year-old Garden Grove resident, robbed a bakery on Chapman Avenue in Garden Grove and took cash at knifepoint.

He also apparently broke into an apartment of one of his neighbors in the complex where he lives. Those residents reported a break-in just after 4 p.m. Before police could respond to take a routine burglary report, a new report came in about an hour later of a homicide at the address, police said.

That apartment complex is located in the 12000 block of Jentges Avenue. One person at the apartment was pronounced dead at the scene with stab wounds. A second person was transported with multiple stab wounds to a hospital and later succumbed to his injuries, police said.

It is unclear if the suspect knew the two neighbors.

Two more robberies occurred at local businesses in the area. One woman was stabbed at an insurance businesses in Garden Grove. She fought back against the attacker and is expected to survive.

Police then responded to reports from a Chevron gas station on Harbor Boulevard. Police said a man was pumping gas when the suspect approached him. He suffered lacerations to his face, and his nose was almost sliced off, but he is expected to survive.

The suspect then made his way over to nearby Santa Ana, where another person was fatally stabbed at a Subway parking lot on 1st Street.

GGPD working multiple scenes with several homicides. Multiple robberies and stabbings by suspect. Suspect in custody by #GGPD at Harbor and First in Santa Ana. PIO at Puryear and Chapman in GG. #GGPD32 #homicide pic.twitter.com/62Xq8lm97n

At a press conference Wednesday night, Garden Grove Lt. Carl Whitney said undercover officers located the suspect's vehicle, a silver Mercedes registered in his name, in the parking lot of a 7-Eleven on Harbor Boulevard and 1st Street, and called for backup.

The suspect was arrested after he exited the store carrying a knife and a handgun. Whitney said the suspect stabbed a security guard inside the store and took his gun. That guard was rushed to the hospital but later died.

"These are all random acts of violence. Our suspect was not associated with any of our victims," said Whitney. "We don't know. It's just pure hate that this guy did this,"

Garden Grove and Santa Ana police were at one point investigating at least eight crime scenes in the area.

Authorities had not determined a motive for the stabbing spree.

"Just very sad and shocked that this is happening here. Not sure what's going on in their head and what's their motive, what's going on, it's very sad," said a woman near one of the crime scenes.

An investigation is ongoing, and police are reviewing surveillance videos at the businesses that were involved in the crime spree.