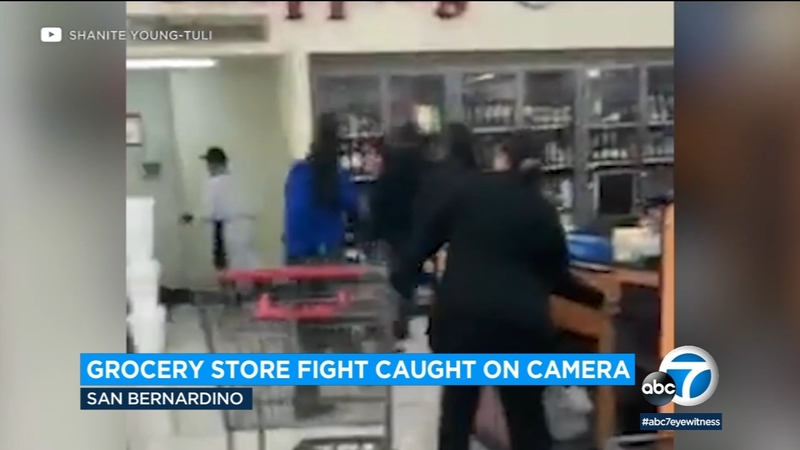 Stater Bros. shopper claims he was attacked by manager, employees

SAN BERNARDINO, Calif. (KABC) -- A violent fight involving a Stater Bros. store manager and a shopper was caught on camera, and the customer - who claims he was attacked - is now taking legal action.

It happened at the store on E. Baseline Street in San Bernardino on Wednesday, April 13.

John Valencia told Eyewitness News he got into a verbal argument with the store manager over a customer service issue. He claims the manager quickly escalated the situation.

"I was trying to leave, that's when the manager just grabbed me from my neck and he shoved me towards the back where the bathrooms were at," said Valencia. "They pushed the door shut and they started pounding on me. They started socking me and kicking me."

Valencia said he was taken to an emergency room and was told he suffered a minor concussion.

"I'm pretty knocked up. I have a huge bump on the back of my head," he said.

"This wasn't a situation that called for violence of any kind. There was absolutely nothing that [Valencia] did to warrant that type of response from an employee of the store," said Hapuarachy.

In a statement issued to ABC7, Stater Bros. Markets said, "We are currently conducting an internal investigation of the incident and are unable to comment any further at this time."

"I want the people involved to be arrested," he said. "They shouldn't be working at Stater Bros. anymore. That's not a safe environment with those type of employees."

No arrests were made in this incident. The case will be turned over to the San Bernardino County District Attorney's office for review.

Police said Stater Bros. personnel submitted surveillance video that captured the incident and it has since been placed into evidence.