The pursuit may go down as one of the longest chases seen in Southern California.
KABC
By Marc Cota-Robles and Rob Hayes 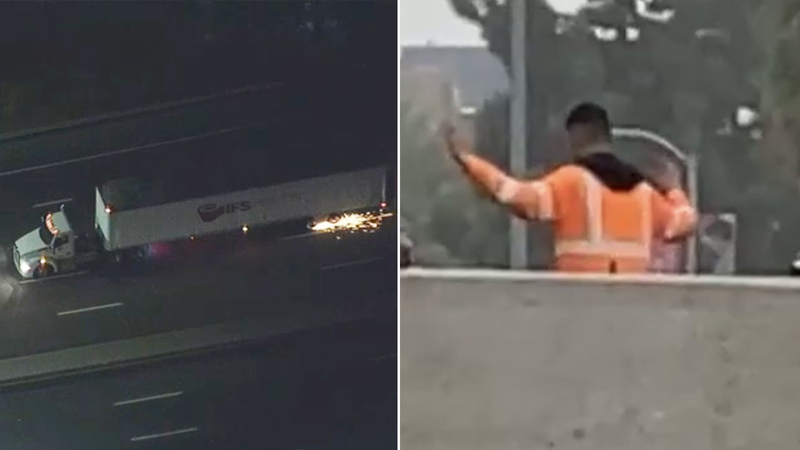 LOS ANGELES (KABC) -- After more than 10 hours that included a dramatic chase and a standoff that halted traffic, the driver of a stolen big rig finally surrendered to authorities Thursday morning.

California Highway Patrol officers along with Santa Ana Police Department's SWAT team detained the driver around 8:45 a.m. According to investigators, the driver is believed to be 22 years old and was found unarmed.

They said he "appeared to be scared" and refused to surrender when they first made contact with him around 3 a.m.

The 18-wheeler he was driving was reported stolen just after 8 p.m. on Wednesday from an Individual FoodService yard in Bell. The suspect then prompted a chase that led officers through Los Angeles and Ventura counties. When officers caught up to the vehicle, the driver refused to pull over.

It's unclear if he is affiliated with the food service company.

At one point, they chased the vehicle on the northbound 5 through the San Fernando Valley and then west on the 118 into Simi Valley.

The suspect ultimately stopped on the 55 Freeway near MacArthur Boulevard in Santa Ana where the driver refused to get out. Drivers in the area saw heavy traffic as the freeway was shut down.

As of Thursday at 9:17 a.m., the northbound lanes of the 55 are now open and the southbound lanes will reopen soon.

The driver drove just under the highway speed limit, around 50-60 mph, through much of the freeway chase.
A logo of the Individual FoodService Company was painted on the side of the truck. By the time the big rig entered the Thousand Oaks area, a successful spike strip attempt took out at least two of the vehicle's tires.

At least nine spike strips were deployed during the chase, but the suspect kept driving despite several of the big rig's tires being completely shredded.

Fog prevented AIR7 HD from continuing to follow the chase, but the pursuit went into late Wednesday night in the Boyle Heights area on the 101 Freeway.