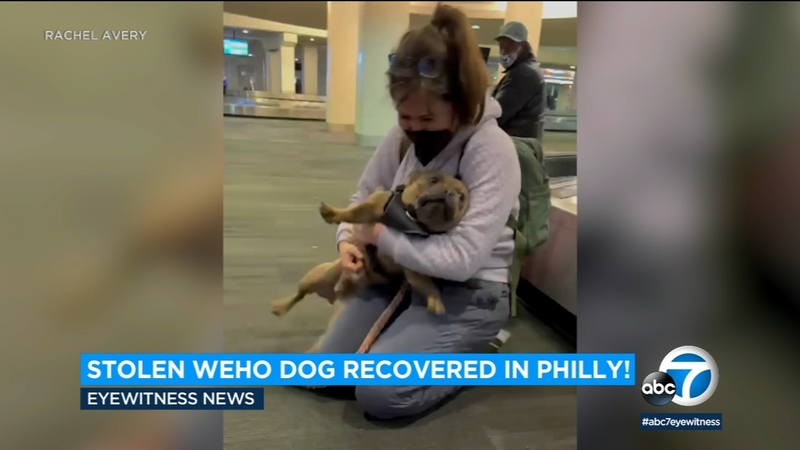 WEST HOLLYWOOD, Calif. (KABC) -- Jag, the French bulldog that was stolen in West Hollywood recently after slipping out of his collar during a walk, was safely reunited with his owner over the weekend.

Rachel Avery and Jag were reunited at the airport in Philadelphia of all places.

Surveillance video from a local business shows Jag running around the neighborhood before several men in a black SUV grabbed him off his front porch and drove away.

Incredibly, days later, Avery received a call from someone in Philadelphia who had the dog, claimed not to have stolen it, and promised to hand it over if she did not press charges.

"When I heard he was in Philadelphia, it was unbelievable," Avery said. "I was in shock that so quickly a dog can be taken and then transported to another state, but here he is, snoring behind me."

A French bulldog slipped his leash in West Hollywood and three men scooped up the dog, claiming he was their own and driving away.

Jag's owner says she is grateful to law enforcement, who took the theft of her dog very seriously, and to all the members of her community who rallied around her to help get Jag back.

In December, a man was attacked and his French bulldog stolen, after he was dragged some 200 feet by the suspects' car in West Hollywood.