The footage shows a woman ripping purses off of a rack before rushing out with two other people.
KABC
By Leticia Juarez 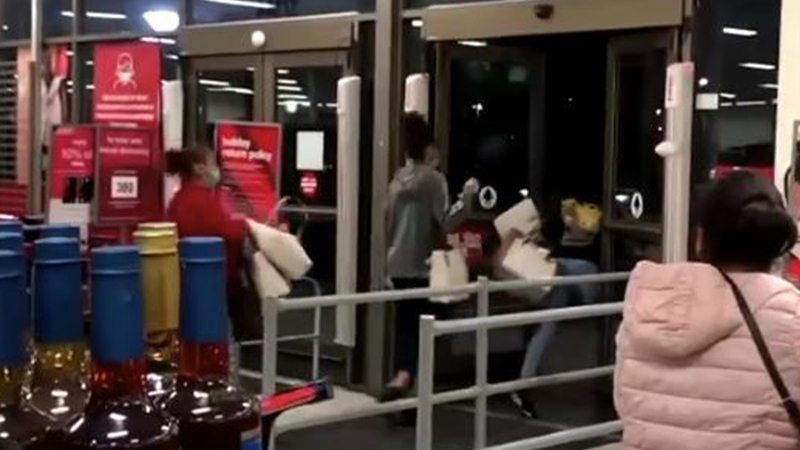 FONTANA, Calif. (KABC) -- A brazen burglary at a TJ Maxx store in Fontana was caught on video, and police say the retailer is one of many being targeted in the area.

The incident happened last week at the store off of Slover Avenue.

Cellphone video was captured by a shopper who was in the store with his daughter.

The footage shows a woman ripping purses off of a rack before rushing out with two other people, who were also seen carrying stolen handbags.

"Before we started recording, they were trying to tear the locked purses on the racks down, and so they were struggling a little bit," said the shopper, who wished to be identified only as Anthony. "So, at that point, we knew what was going on."

Fontana police said the TJ Maxx store is one of many retailers in the area that have been the target of this type of crime.

"One of our stores, Ulta, has been hit numerous times as well as our Home Depot, Lowes, where people are just walking in, grabbing items off the shelf and walking out with no care in the world," said Ofc. Daniel Romero.

On March 10, two thieves went into a Walgreens store in Rialto and got away with a large amount of beauty supplies.

Police say if you're a witness to this type of crime, safely record video - if possible - and call police.

"Make sure that they are safe," said Romero. "Don't get involved in any way. Don't try to be a hero and stop these people. It is a property crime, but if they do have a cellphone, start videotaping from a far distance ... maybe get a license plate [or] a good description."

Anthony hopes this will help officers.

"I work for what I have. I wanted to say something and stop them, but at the same time, things are different in this era," he said.

Anyone with information is urged to contact the Fontana Police Department.