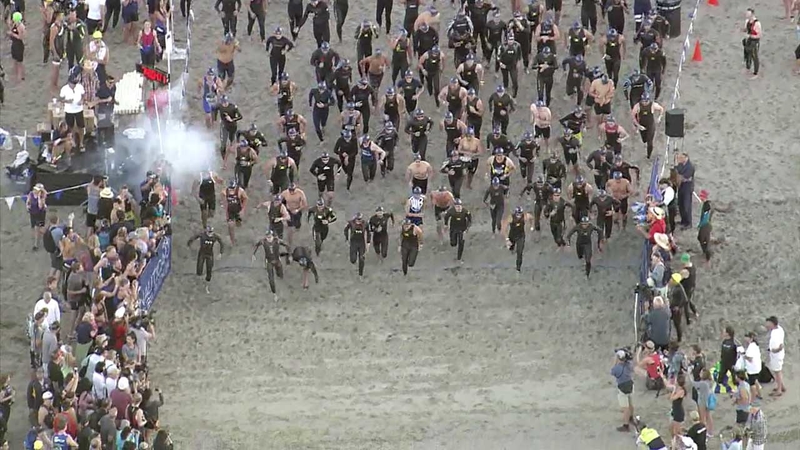 MALIBU, Calif. (KABC) -- More than 5,500 people will swim, cycle and run at Zuma Beach to raise money and awareness for children's cancer research at the Nautica Malibu Triathlon this weekend. Check out the inspirational stories behind three participating athletes.

As he recovered from a broken leg, Jake Kennedy of Topanga became interested in triathlons after hearing about the cross-training benefits.

"I'm getting older. It's something I started five, six years ago," said Kennedy.

The Nautica Malibu Triathlon classic is a sprint - swim a half mile, bike 18, and run for 6.

"This guy was 50 and he had never done anything like that, and I'm like, OK, if he can do it, I can do it," Kennedy said of his friend who got him interested.

Many triathlon participants come for the camaraderie or just a great workout, but it's always inspiring to hear the stories about those who've weathered horrible hardships.

And age is no limit. Some participate to set goals after beating cancer. Others are rehabbing injuries.

Kennedy's first triathlon was 2012, and he has kept at it even after again breaking his leg and hip in four places.

Kyung Lee of Thousand Oaks got hit while riding her bike in April, yet she vows she'll make it to the finish line.

"I broke four places on the right side of my body starting with my cranium and clavicle, elbow, pelvis," Lee said. "It's been the most humbling experience of my life."

This is the 31st year for the event, which has raised more than $10 million for Children's Hospital Los Angeles. Last year, it brought in over $1 million.

This is the reason why Billy Becerra will do the full race on Saturday.

"It was kind of like my thing to do for my son," said Becerra.

Sadly, his son died from a heart defect, but Becerra was touched by the efforts CHLA provided.

"You have heartbreak because you see kids suffering, but then you see a lot of kids walking out the door healthy," said Becerra.