Wild surveillance video shows the speeding car heading directly toward the home before flipping several times through the air.
KABC 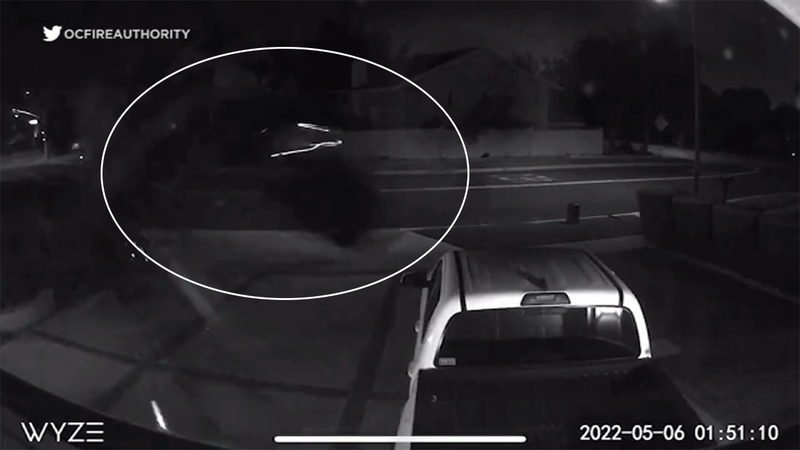 Car barrels toward home before crash-landing, catching fire in Tustin

ORANGE COUNTY, Calif. (KABC) -- A wild crash that sent a car barreling toward a home before catching on fire was caught on surveillance video.

It happened just before 2 a.m. on Friday in the 19000 block of La Loma Drive in an unincorporated part of Tustin.

The video shows the speeding car heading directly toward to the home, hitting a mailbox before flipping several times through the air.

The car crash-landed upside down into the side of the home and quickly caught on fire, according to authorities.

FFPM’s extinguished an engine compartment fire & treated 2 pts after their vehicle landed upside-down against a house in the 19000 blk of La Loma Drive in the unincorporated area of Tustin just before 2 a.m. Both pts self-extricated before our arrival. pic.twitter.com/5R1gZQB7nW

1 trauma pt transported in stable condition, & 1 pt refused transport. Nobody inside the home was injured. FF’s stabilized the vehicle as they worked with law enforcement to secure the scene & have the vehicle towed.

Firefighters were able to extinguish the fire soon after they arrived.

Investigators with the Orange County Fire Authority said the driver and a passenger managed to escape the smashed car. One of them was sent to the hospital and was reportedly stable.

The other refused to seek medical attention, according to authorities.

Meanwhile, no one was inside the home at the time of the crash. The house itself wasn't seriously damaged.

It's unclear what caused the crash.