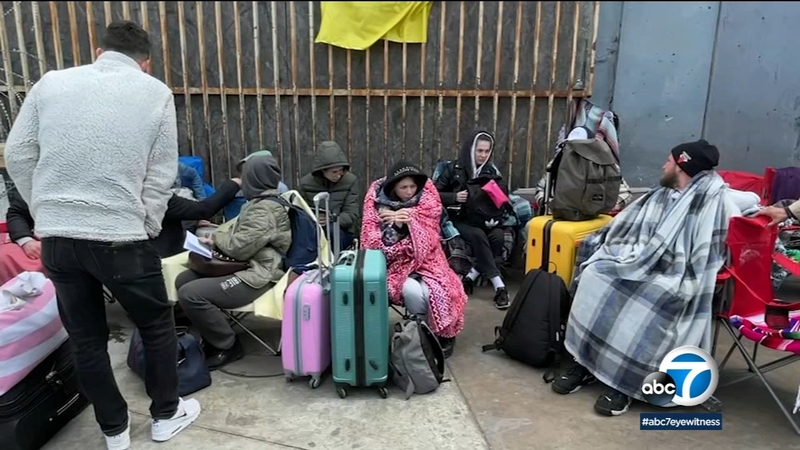 Ukrainians fleeing war wait in Tijuana to seek refuge in US

TIJUANA, Mexico (KABC) -- Many refugees fleeing war, violence and persecution have long hoped Mexico is their last stop before seeking refuge in the U.S. Most recently, hundreds of Ukrainians.

"I feel safe right now because the war is far away from my children," said Tania, who left Ukraine with her husband and three girls two days after Russia's invasion.

They first spent a month in Poland and now hope to reunite with family that lives in the U.S.

"I feel happy that I can meet my parents," Tania said.

Under the Trump-era policy citing pandemic health concerns, immigration officials can - and do - turn away most families and adults seeking asylum without a chance to present their cases.

In the last few weeks, the number of Ukrainian families arriving in Tijuana grew exponentially. There are two staging areas near the San Ysidro Port of Entry, and the waitlist Friday was at nearly 600 people.

"There have been some exceptions made for unaccompanied children and now for Ukrainians, and then some of these sort of case-by-case exemptions for particularly vulnerable families," said Blaine Bookey, legal director of the Center for Gender and Refugee Studies. "But everyone else has been completely shut out from seeking asylum."

Eyewitness News first spoke with Bookey a few weeks ago. She was in Tijuana, where she assisted some Ukrainian refugees and took on the case of a Haitian family that was denied an exemption from Title 42.

Landy and Anthony met in Brazil after fleeing gang violence in Port-au-Prince. Landy recounts her cousin was raped and her body was held for ransom. Her sister was assaulted in the last few weeks.

A group of Orange County moms headed to the U.S.-Mexico border to help give humanitarian aid to Ukrainian refugees.

As the couple and their three girls made their way from Brazil to Mexico, they traversed the dangerous rainforest region known as the Darien Gap, walking through area littered with dead bodies.

After arriving in Mexico, their 3-year-old developed a severe skin infection that one doctor described as potentially life-threatening.

CGRS added that supplemental evidence to the family's request, which led to the family now being granted an exemption to Title 42.

Eyewitness News met with Bookey and the family hours before they were able to cross the border into the U.S., where Landy's father and brother live. CGRS was one of many organizations supporting them along the way.

"It absolutely should not take a full team of lawyers, doctors, you know, other people, pushing for just one family to have the chance to seek to seek asylum, which is their right under the law," Bookey said.