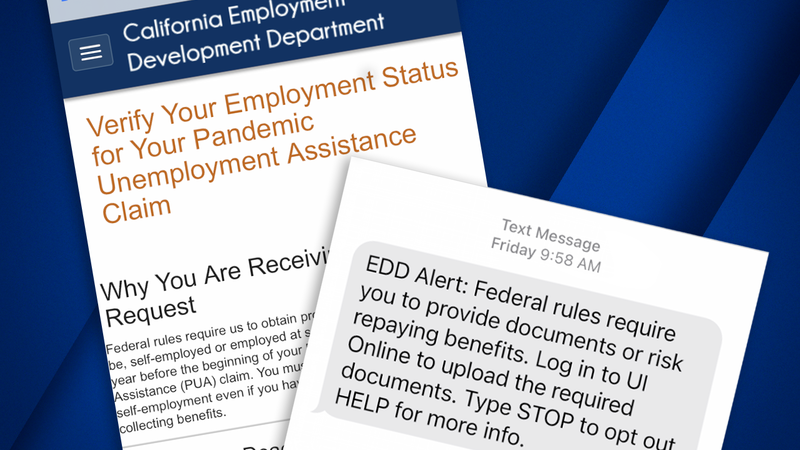 SAN JOSE, Calif. -- The federal government stopped providing special unemployment benefits to gig workers, independent contractors and the self-employed two months ago. Those special benefits were meant to throw a lifeline to those who lost their income due to the pandemic, but didn't qualify for traditional unemployment benefits.

But now -- nearly two years later -- the EDD is suddenly requiring these workers to prove they really were eligible for those benefits -- or they have to pay them all back.

This is coming as a shock just as folks are getting back on their feet, as the holidays approach. Nearly one million Californians are receiving these threatening notices. EDD saying it's a federal rule: they must prove they were really self-employed or pay back the money that helped them get through the pandemic -- possibly with a 30% penalty.

"Whether you're in the gig economy, whether you're an independent contractor, everyone who is out of work is eligible for unemployment insurance," said Rep. Jackie Spier (D - Hillsborough) in March of 2020.

Those reassuring words from federal lawmakers announced pandemic relief for all, as COVID-19 swept the nation, shutting the economy, throwing millions out of work.

The government would pay pandemic benefits even to the self-employed, like Uber drivers, beauticians, and store owners forced to close shop.

"The fact that we got anything, I felt like was really great," said hair stylist Heather Mendoza of San Jose. "We lost a lot, some people are still suffering. That money helped all of us sort of stay afloat."

The EDD's response to the man whose claim was rejected and sent to appeals: "We unfortunately did not respond on time."

"It was really really tough for us to survive, pay rent, pay bills," echoed Einstein Paredes, a salon owner in San Francisco. "It was great to, how the government helped us out."

Both had to stop working in the pandemic, and received unemployment benefits from the EDD.

Now, nearly two years later, the EDD is requiring them to prove they deserved it. The EDD sent each of them a startling text message.

The message read: "EDD alert: federal rules require you to provide documents or risk repaying benefits. Log in to upload the required documents."

"At first it was really intimidating. I'm like, 'oh my gosh what do I have to do now?'" Mendoza said. "It's a pull and tug sort of thing, you know, like you're giving me money but now you don't think I deserve the money."

At first Paredes didn't believe it was real. "I thought it was a phishing scam," he said.

Thousands more got the same notice in an email that read in part: "If you do not provide the required documents you may have to repay benefits..." and "we will add a 30% penalty if you intentionally gave false information."

"I don't understand why a year later you're asking me for this information, you know? And they don't even give you an explanation what's going on?" said Paredes.

"It's just, you know, really nerve-wracking to sit on pins and needles a year and a half later, wondering if you're gonna have to pay that back," Mendoza said.

The EDD awarded unemployment benefits to nearly three million self-employed Californians since April 2020. About two million have already submitted documents such as tax returns that show they were self-employed.

However, the EDD says nearly one million only signed their claims under penalty of perjury, or lack of enough documents.

Now the EDD is backtracking to get all required paperwork.

"It kind of sucks for us because we have to go through the extra legwork and prove that we needed it," said Mendoza.

"So we're backtracking, you know, we're backpedaling, exactly. The stress of the government wanting their money back," said Paredes.

Folks are asking why EDD didn't require everyone to supply documents in the first place, instead of giving out money and asking for proof nearly two years later. EDD says it just wanted to get payments out faster.

For a list of documents you can use to prove you are eligible for the benefits you received as a freelancer or gig worker, click here (then click on the "Acceptable Documents" tab).