The pilot spoke to Eyewitness News about the moment the small plane crashed while attempting to land at an airport in Upland.
KABC
By Leanne Suter 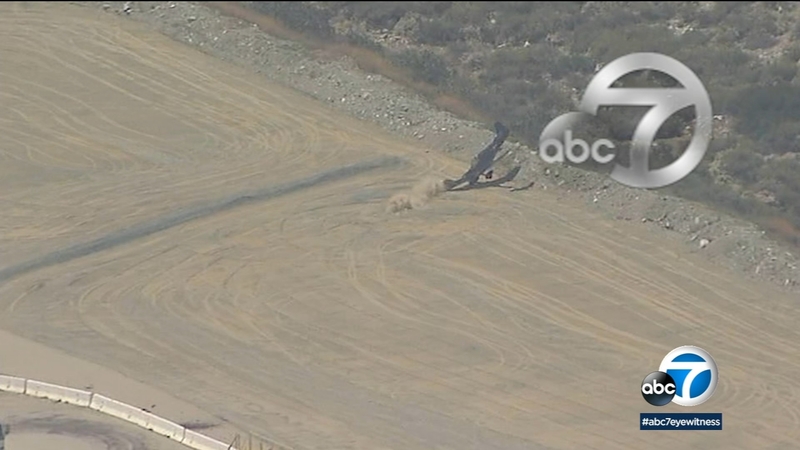 Pilot, 80, speaks out after harrowing crash at IE airport

UPLAND, Calif. (KABC) -- It was a harrowing plane crash captured on video, and now the pilot who survived it recalls the frightening ordeal.

David Reser, 80, spoke to Eyewitness News about the moment the small plane he was piloting crashed while attempting to land at an airport in Upland Wednesday afternoon.

Reser faced two major problems. The propeller of the plane flew off and oil suddenly covered his windshield, forcing him to fly blind.

"It was a real surprise when the propeller went off. It came off the airplane, but I didn't have a sudden fear," he said. "I've always practiced off-field landings or deadstick landings. Now I get to do one."

"Mayday, Mayday! Just lost my propeller, there is oil all over the screen," Reser says in released audio tapes.

AIR7 HD was over the scene as a small homebuilt plane bounced off the runway at an Upland airport and crashed into a nearby field. The pilot walked away with only minor injuries.

Reser relied on his 48 years of flying experience. Wanting to avoid homes in the area, he dove for the runway looking over the side to try to stay on course, but he was coming in too fast and too high. He knew he wasn't going to make the runway.

"My first thought was when the wingtip hit and it was starting to turn, I thought, 'So, this is the way you die, huh,'" he said. "That was the only thought I had."

AIR7 HD was over the scene as the aircraft hit the runway at Cable Airport, bounced into the air and came to a rest in a field.

The long-time pilot suffered minor injuries and was rescued from the plane by emergency crews after he was trapped in the cockpit.

He was seen shortly afterward walking around.

The Federal Aviation Administration says the aircraft was a homebuilt kit plane. His Thatcher CX-4 took him six years to build.

Despite the close call, he says he can't wait to get back in the air.