Also under the deal, U.S. Soccer will share part of its broadcast, partner and sponsorship revenue with a 50-50 split.
KABC
By Leticia Juarez 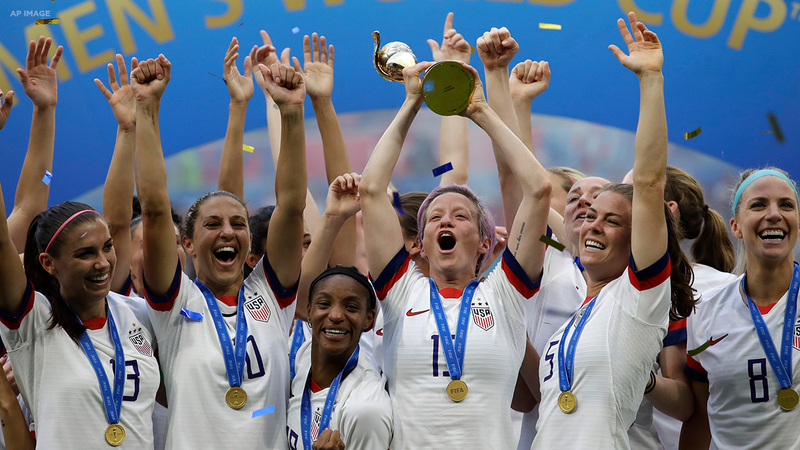 It's a big play for the U.S. Women's National Soccer Team.

In a historic collective bargaining agreement, the U.S. Soccer Federation has agreed to pay players on its men's and women's teams equally.

"It's a game-changing moment here in the U.S., but it has the potential to change how international soccer and international sports do business with the equalization of prize money for men's and women's World Cup," said U.S. Soccer President Cindy Cone.

Beyond closing the pay gap, both the men's and women's teams will pool their prize money from their perspective World Cup appearances and spilt the winnings equally among the players and the federation.

Also under the deal, U.S. Soccer will share part of its broadcast, partner and sponsorship revenue with a 50-50 split between men's and women's soccer.

For young women in the sport, the landmark deal is providing an opportunity that wasn't there before.

"It's exciting for the first time to hear that women's sports are finally getting equally pay and it's a real career opportunity now, it's not just a dream," said Carly Luna.

Luna is the captain of her soccer team at Cal State University in San Bernardino. She is hopeful other women's sports teams will score similar deals.

"This is just setting the precedent in what we should expect in women's sports," said Luna. "But that doesn't mean it stops there. I think for women, it has to carry over into the other sports."

The landmark deal was years in the making and did not happen without a struggle.

Even after winning four World Cups and Olympic medals, the U.S. Women's National Soccer team had to fight of better pay and recognition from the U.S. Soccer Federation.

At the same time, their skill on the field was drawing in fans and an audience while inspiring the next generation of players.

"We definitely see it here," said Mark Peters, CSUSB Head Women's Soccer Coach. "There is more people playing, there's more teams, there's more clubs out there, there's more opportunities for them and I think it is pretty obvious the growth and impact the women's national team has had on the sport in this country."

The historic agreement will cover the next two World Cups and Olympic games and make players on both the men's and women's teams the highest paid national team players in the world. The collective bargaining agreement runs until 2028.