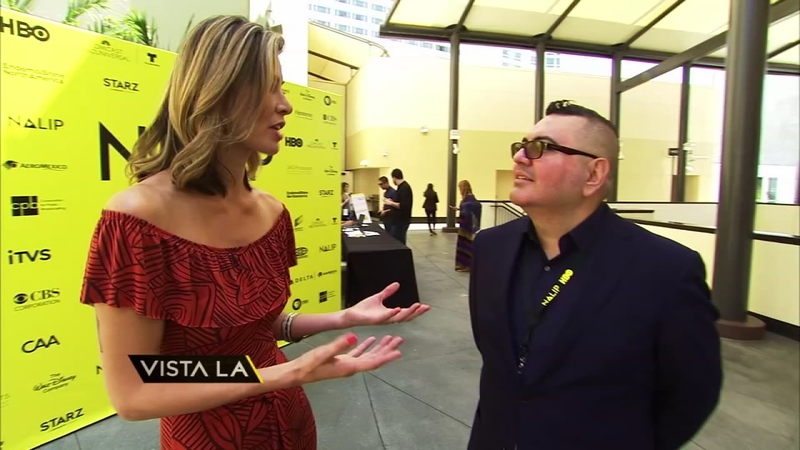 Latinos getting the job done in Hollywood

We recently caught up with some of the creatives still changing the face of Hollywood, as Latinos continue to make strides in the entertainment industry.

"DO IT LIKE AN HOMBRE"
It has already broken box office records in Mexico, and now it's here in the U.S. "Do It Like An Hombre," a Spanish-language comedy that tackles homophobia, is produced by -- and stars -- real-life couple Aislinn Derbez and Mauricio Ochmann, who play brother and sister in the film. Hear how they were able to turn a tough situation into something funny and enjoyable!
EMBED More News Videos

Real-life couple Aislinn Derbez and Mauricio Ochmann talk about starring and producing the Mexican hit movie "Do It Like an Hombre."

WHY YOU'LL LOVE "COCO"
Adrian Molina, co-director & writer of Disney's much-anticipated film "Coco," spoke with Vista L.A. at the NALIP summit about the origins of the Day of the Dead-themed movie. He also shared his personal connection to the movie's theme and what he thinks audiences, Latinos in particular, will love about the movie. The film opens Nov. 22.
EMBED More News Videos

Vista L.A. catches up with the co-director of Disney's new film, "Coco," set to be released this year.

Producer of Disney's "Cars 3," Andrea Warren, talks about Cristela Alonso being the perfect actress for the starring role in the popular franchise.

A CHAT WITH "BEATRIZ'S" PUERTO RICAN DIRECTOR
"Dinner with Beatriz," a dark comedy with a powerful message, has been called "an allegory for our turbulent political times." The movie stars Salma Hayek in a role unlike any she's taken on before. Vista L.A.'s Patricia Lopez caught up with the film's avant-garde director, Miguel Arteta, to discuss his award-winning film.
EMBED More News Videos

Miguel Arteta sits down with Vista L.A. to talk about his latest dark comedy, "Dinner with Beatriz," which stars Mexican and American actress Salma Hayek.

THE TRUE STORY: JENNI RIVERA
Before the recent premiere of "Mariposa de Barrio," the series based on the true story of music legend Jenni Rivera, Vista L.A. chatted with the actor selected to play the leading role, Angelica Celaya. The highly-anticipated series is based on her book, "Inquebrantable," as well as unpublished testimonies from her family, close friends and associates. It explores Rivera's life as a daughter, mother, wife, lover and artist. "Jenni Rivera: Mariposa de Barrio," highlights the most important events in Rivera's life and serves as a source of inspiration, optimism and empowerment for Latinas and the U.S. Latino community at large.
EMBED More News Videos

WHY DANNY TREJO JUST CAN'T STOP
Actor and restaurateur Danny Trejo recently opened his fourth SoCal eatery. Trejo's Cantina in Pasadena, located right next to the iconic Pasadena Playhouse, keeps many of the favorite dishes from his other restaurants but features a more upscale dinner setting with an upgraded menu. Trejo gave Vista L.A. a tour of his new eatery and a sampling of the new menu.
EMBED More News Videos

Danny Trejo, a Latino actor-turned-successful-entrepreneur, has chosen a hot spot in Pasadena for his latest SoCal restaurant, Trejo's Cantina.