5 Freeway reopens through Grapevine after more than 36-hour closure, icy conditions may return 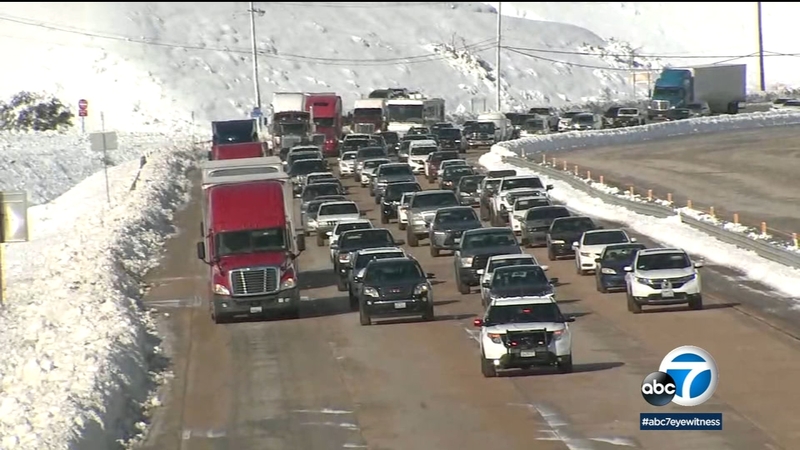 5 Freeway reopens through Grapevine after more than 36-hour closure

Many drivers were seen sleeping in their car overnight near an entrance to the freeway.

The 15 Freeway through the Cajon Pass reopened Thursday afternoon, several hours after closing amid heavy snowfall and treacherous road conditions.

However, the 15 was closed in both directions from Baker to Primm due to car wrecks and ice on the roads, Caltrans said. Authorities are urging drivers to use extreme caution as the roads will likely remain icy.

Hundreds of travelers were stranded for hours at the Cajon Pass in the Mojave Desert as a result of snowy conditions.

The storm stopped drivers in their tracks on Christmas Day, with dozens of cars covered in snow along the 5 Freeway.

"It's awesome, it's beautiful out here. But you don't want to be stuck like the way I was stuck," said one man who was traveling from Los Angeles to Bakersfield.

A driver was found dead inside a big rig on the 5 Freeway through the Grapevine, according to the California Highway Patrol. A cause of death has not been determined.

This is already the second big storm of the season for the region - and the last one was also on a holiday.

Last month's Thanksgiving storm dropped nearly four feet of snow on the Big Bear area - the heaviest snowfall to hit in November for more than 50 years. It closed roads throughout the region and knocked out power to thousands of customers. The snow and wind were so strong even the ski resorts closed.

As of Friday evening, traffic was moving steadily on the 5 Freeway, but if snow melts, icy conditions could shut it down again.

Another storm is expected to bring rain to Southern California on Monday.