The driver, who's from Diamond Bar but has not yet been formally identified, has since been detained.

A wrong-way driver slammed into a group of law-enforcement recruits out for a training run in Whittier on Wednesday.

WHITTIER, Calif. (KABC) -- A wrong-way driver slammed into a group of law-enforcement recruits out for a training run in Whittier on Wednesday.

The collision left the 25 recruits with injuries ranging from head trauma to loss of limbs. One was hospitalized on a ventilator.

The incident happened in the South Whittier area near Mills Avenue and Trumball Street at around 6:29 a.m.

According to Los Angeles County Sheriff Alex Villanueva, a class of about 75 recruits were on a run as part of a training exercise when a 22-year-old driver crashed into the group.

The driver, who's from Diamond Bar but has not yet been formally identified, has since been detained. Eyewitness News was told he is cooperating with authorities.

A total of five recruits are currently in critical condition, four are being treated for "moderate" injuries and 16 have minor injuries.

Surveillance of the incident recorded from a nearby backyard shows the group of recruits running in tight formation along the side of the road, escorted by two cruisers at the back of the columns.

The SUV is driving on the left side of the road and does not appear to slow down or swerve as it heads directly into the jogging group.

In fact there were indications the driver may have sped up shortly before the collision, Villanueva said.

"Some recruits are saying they heard the car accelerating, they estimate around 30 to 40 miles per hour," the sheriff said. "You can see how little reaction time that allows someone."

There was no indication of any obstacles or other vehicles on the road that would trigger the driver's behavior.

The Honda SUV also crashed into a light pole and knocked it down after striking the recruits.

Villanueva said the recruits are from several different agencies, including the Bell, Glendale, Pasadena, El Segundo and UCLA police departments. The rest were with the sheriff's department.

The driver suffered minor injuries, according to the fire department.

Villanueva said the driver was given a field sobriety test shortly after the crash and "blew a 0.0."

The test does not rule out drugs, but Villanueva said the official cause of the incident remains unknown.

When asked if the crash appeared to be accidental or intentional, Villanueva responded: "It looks like it's an accident, a horrific accident."

Villanueva said the injuries range from head trauma and broken bones to loss of limbs. He said at least one recruit is on a ventilator. Some, however, are expected to be discharged from the hospital as early as Wednesday afternoon.

"Fortunately, every class, typically we have EMTs, I think this class even had an RN who was a recruit, so they were able to provide first aid right on the spot with the equipment that they had," Villanueva said. "They went over, ran to the fire station and knocked on the door because it was literally just half-a-block away. That was fortunate as well, so things that worked in our favor happened."

LASD Capt. Pat MacDonald, who leads the department's training bureau, said the recruits left for their run with two patrol vehicles as an escort following the usual procedure.

They were running in the street in four-column formation.

"There was a light pole on the east side of the street and the one thing that was relayed to me was, 'Thank God for that light pole' because the vehicle ultimately hit it and stopped as opposed to possibly hitting more recruits," said MacDonald.

Former Long Beach police chief Robert Luna, who will succeed Villanueva as Los Angeles County sheriff, issued a statement saying, "I'm heartbroken and praying for the recruits who were injured this morning after being hit by a vehicle in Whittier. I want to offer my unconditional support to the Sheriff and Police Chiefs from LA County agencies, their departments and the families of those who are injured in this difficult time."

Earlier on Wednesday as the scene was unfolding, AIR7 HD captured more than a dozen sheriff's units along with several fire trucks and ambulances at the scene. First responders were seen treating the recruits in the middle of the street and loading several others into ambulances.

A man who lives in the area said he woke up after hearing the crash and ran outside.

"I come out to see people on the floor ... it was really crazy," said the witness, who wished to be identified only as Joseph. "Everyone was kind of in a panic, there was cables on fire and the car was smoking ... it was really a graphic scene."

Joseph said he and several other neighbors rushed to help some of the recruits by giving them water and towels.

"The car was completely wrecked, like the whole front end was done," he said. "The light pole was on the floor ... it was like three or four of us neighbors that came out because this has happened before. We've lived here for 10 years. It's happened before like where a car crashes into a gate, but this was like ... no one could ever imagine for this to happen."

Joseph described the massive scene as "surreal" and said he saw several patients with serious injuries.

"There were so many people. Everyone was kind of in various conditions, some were unconscious, some were still conscious, some with really bad injuries to their legs. There was people bleeding from their face. The sheriff's academy ... like they run through here all the time so you feel kind of connected to them," said Joseph. "So it was a really crazy thing to wake up to."

Authorities said the traffic portion of the investigation is being handled by the California Highway Patrol. 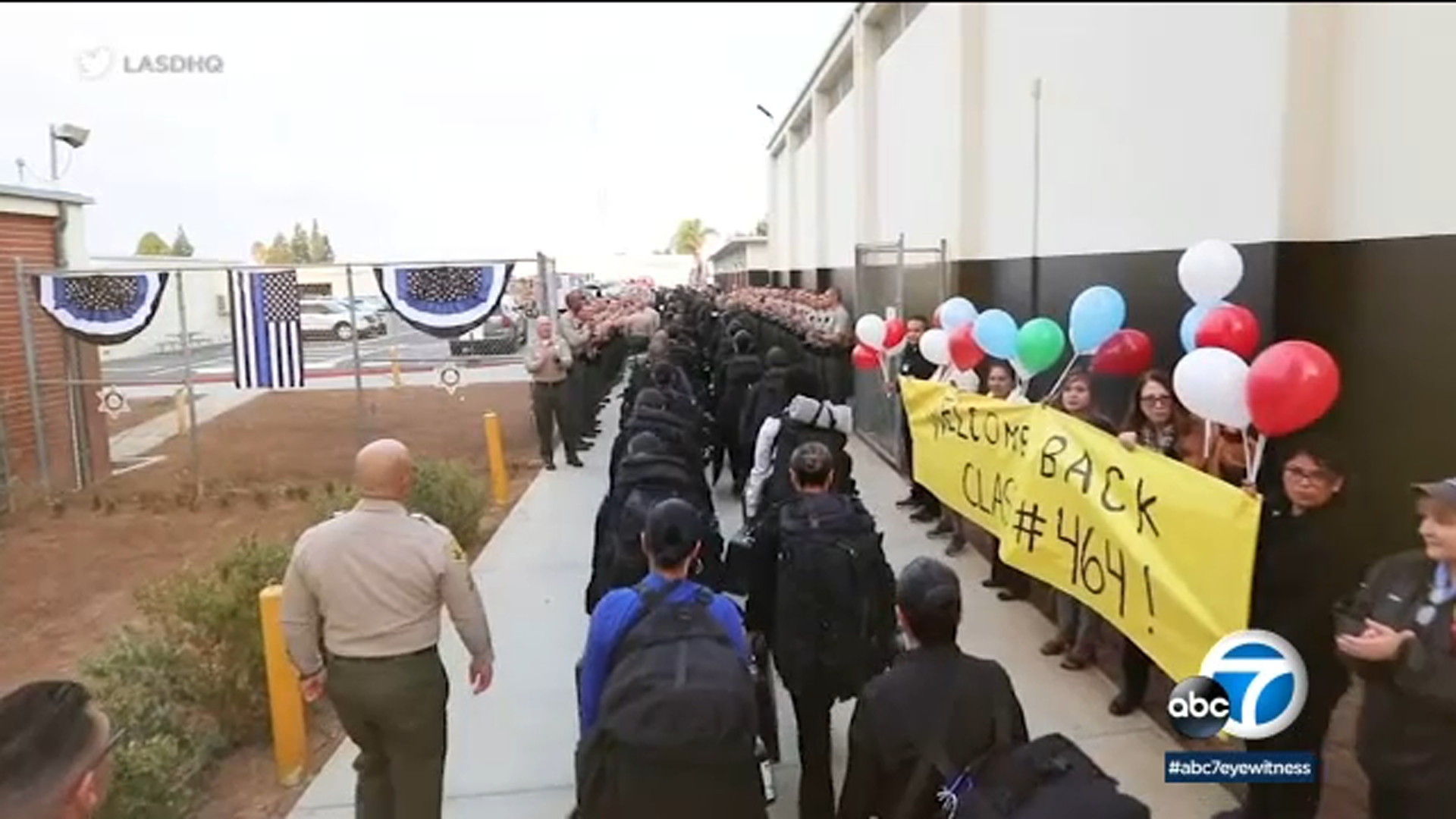