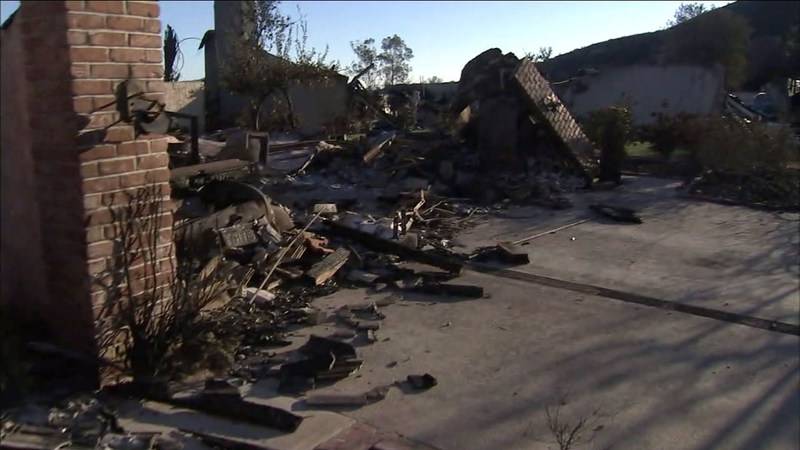 MALIBU, Calif. (KABC) -- Rain is in the forecast this week and that has people in the Woolsey Fire burn area concerned because too much rain could mean dangerous debris flows or potentially deadly mudslides.

The National Weather Service on Sunday tweeted about the potential for significant travel delays Wednesday afternoon into Wednesday night because of the heavy Thanksgiving travel traffic, the forecasted rain and potential slides.

The greatest threat of rock slides and mudslides are on Highway 1 and canyon roadways in the Woolsey Fire and Hill Fire burn areas, the weather service said.

The burned hillsides no longer have vegetation and trees are simply gone in some cases, which means no roots are holding down the soil once its saturated.

Recent burn areas are at risk for mud & debris flows when heavy rain occurs. There is a 20% chance of debris flows on Wed. IN ADDITION - rock/mudslides are always a risk on canyon roads when it rains! #SoCal #CAwx #CAfire pic.twitter.com/lFTeCGTCLJ

After the Thomas Fire erupted last December, flames left the land in much the same way and were deemed the cause of the deadly mudslides in Montecito.

On top of the weather concern, Los Angeles County began repopulating some Malibu neighborhoods such as Point Dume, but Southern California Edison crews were still working at 2 p.m. and beyond, when checkpoints were supposed to reopen for homeowners on Latigo Canyon and Corral Canyon roads at Pacific Coast Highway.

"We're waiting to see if we can get back up. The guy who just left here lives in our guest house, and he has been up and down but not able to get back up sometimes...but now it seems promising that maybe Edison will let us up, maybe," said Latigo Canyon resident Tom Sturman.

Malibu residents line up to get back to their homes after the Woolsey Fire.

Areas north of Malibu should remain closed, and anyone wanting to get back will have to show proof of identification.

Meantime, power outages in Malibu will be in effect from 8 a.m. to 8 p.m. on Monday for repairs to transmission lines.