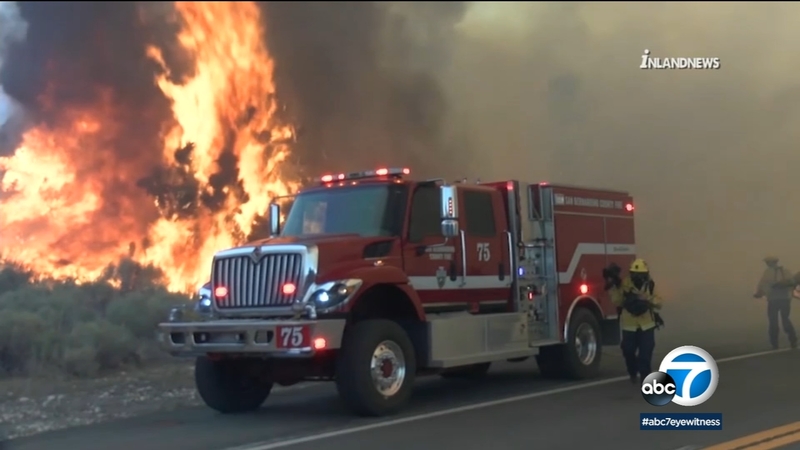 Brush fire near Wrightwood grows to 990 acres; evacs in place

WRIGHTWOOD, Calif. (KABC) -- Firefighters on Monday continued to battle a wildfire in the Wrightwood area that burned nearly 1,000 acres over the weekend and forced some people from their homes.

The fire, dubbed the Sheep Fire, broke out Saturday amid scorching temperatures and bone-dry brush, and strong winds continued to fuel the flames. By Monday night, the fire had grown to at least 990 acres and was only 27% contained.

Mandatory evacuations were issued for Desert Front Road, Wild Horse Canyon Road and the community of Wrightwood -- the evacuation order is for Highway 2 to Mesquite Street, from Highway 138 to Sand Canyon, and from Wright Mountain Road to Lone Pine Canyon Road.

Additionally, there is an evacuation warning in place for all of Wrightwood, the San Bernardino County Sheriff's Department said.

A wildfire in the Wrightwood area continues to burn and has grown to at least 990 acres as of Sunday night.

The Red Cross opened an evacuation center at Serrano High School located at 9292 Sheep Creek Road in the unincorporated community of Phelan.

Small animals and livestock can be taken to the Devore Animal Shelter located at 19777 Shelter Way in San Bernardino.

Highway 2 was shut down from Highway 138 to the Sheep Creek area, according to the San Bernardino County Fire Department.

Longtime residents in the area said they are concerned because they have not seen fire burn in this area before.

"When you have fires that comes through the south, through Lytle Creek, up through that area, they're accustomed to it and although they are not less scary, it's a known," Wrightwood resident Scott Berg said. "And this being an unknown, we don't have fires that you're looking at on this side very often and that's what's concerning for most of the residents."