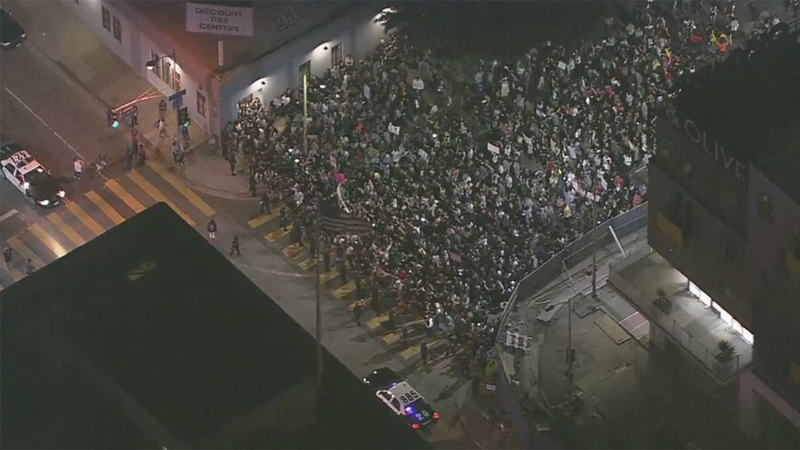 LOS ANGELES (KABC) -- Protests against Donald Trump's election as president continued for a third night in Los Angeles, as hundreds of marchers walked through the streets of downtown.

The crowd started at a modest size of 50-75 rallying at Los Angeles City Hall. They then started marching through the streets of downtown as one group merged with another and the crowd grew to several hundred as they continued walking.

They held anti-Trump signs and chanted slogans that included: "We reject / the president-elect" and "Not my president."

Some also chanted "Hands up don't shoot" when confronted by officers.

Overall the marchers were relatively peaceful. There were a few scattered reports of people throwing rocks and bottles at officers and some police cars tagged with graffiti.

There was also a call for "officer needs help," which triggered a response from multiple officers sprinting down downtown streets. A man was taken into custody and handcuffed as police with flashlights canvassed the area, apparently looking for an object related to the arrest.

Demonstrators marched through the streets of downtown Los Angeles in protest of Donald Trump's election as president on Thursday, Nov. 10, 2016.

By midnight, several hundred people remained on the streets, but LAPD tactical officers had blocked the crowd on Olive Street and were dispersing them in small batches.

The Los Angeles protests were among many held around the country Thursday in the wake of Trump's election, including Portland, Oakland, Minneapolis and even Vancouver, Canada.

The president-elect blasted protesters on his Twitter account: "Just had a very open and successful presidential election. Now professional protesters, incited by the media, are protesting. Very unfair!"

Just had a very open and successful presidential election. Now professional protesters, incited by the media, are protesting. Very unfair!

Earlier in the day Thursday, a group of anti-Trump protesters shut down the 10 Freeway near California State University, Los Angeles, in Boyle Heights.

The crowd blocked a freeway entrance and part of the roadway near Eastern Avenue at about 3 p.m. Los Angeles police were able to clear the protesters peacefully at about 3:45 p.m.

The protesters were believed to be composed of both college and high school students.

At USC, a group of students from Manual Arts High School in South Los Angeles marched toward the Coliseum and crossed Exposition Boulevard onto the USC campus. The high school students stopped at the fountain near Tommy Trojan and a second group of about 50 students joined them later.

Students at USC were seen at one point holding hands to form a human chain.


More students joined the protest and students from both schools marched down Tweedy Boulevard.

At UCLA, hundreds gathered with signs and shouted as they marched across the campus.


Protest have been sparked across the nation after Trump's victory over Democrat Hillary Clinton on Election Day.
Twenty-eight people were arrested overnight Wednesday as thousands took to the streets of downtown L.A. and blocked traffic on the 101 Freeway in protest of Trump.