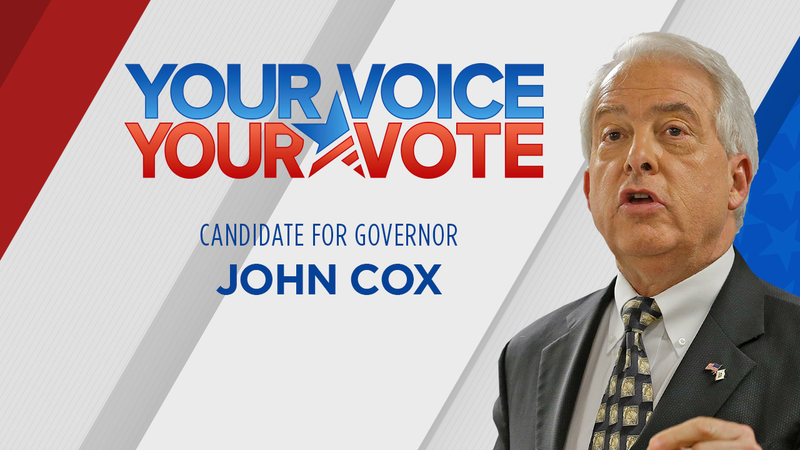 SAN FRANCISCO -- In the November election, California voters will decide on a new governor. Here's a look at Republican gubernatorial candidate John Cox.

John Cox describes himself as a self-made millionaire who grew a business from scratch to employ nearly 100 people. Cox has long been active as a volunteer helping rebuild homes for low-income seniors and people with disabilities in the San Diego area.

This is not the first time Cox has run for public office. He ran for Congress in 2000 and the U.S. Senate in 2002. He also appeared on some primary ballots as a Republican presidential hopeful in 2008.

He describes his campaign as one to "take California back from the special interests that own the politicians in Sacramento." Cox blames the Sacramento establishment for levying the highest state taxes in American and for California having America's highest poverty rate.

The 63-year-old and his wife Susan live in San Diego and they have four daughters. Cox put himself through college by teaching tennis. He holds a law degree from Kent College of Law. He is also a CPA.

Cox grew up in Chicago, as the son of a single mother who taught in Chicago's public schools. His mother and stepfather were both Democrats. Cox often recited lines from President John F. Kennedy's inaugural speech as a boy.

He proposes streamlining the process of building new housing that would eventually create more units thus lowering the cost to rent and buy in California.

Opposes California's status as a "sanctuary state." Supports securing the Mexican border to stop the flow of undocumented immigrants and human trafficking. Cox believes both of those issues lower the quality of life in California, especially for people in the state's inner cities.

Cox promises to put Californians back in charge of their health care and decrease the influence of elected officials, Big Pharma, HMOs and insurers.

Cox has expressed his opposition to both. On the death penalty, Cox cites his religious beliefs as a Roman Catholic. He has described abortion as being "murder -- plain and simple." Cox believes abortion should be regulated at the state level.