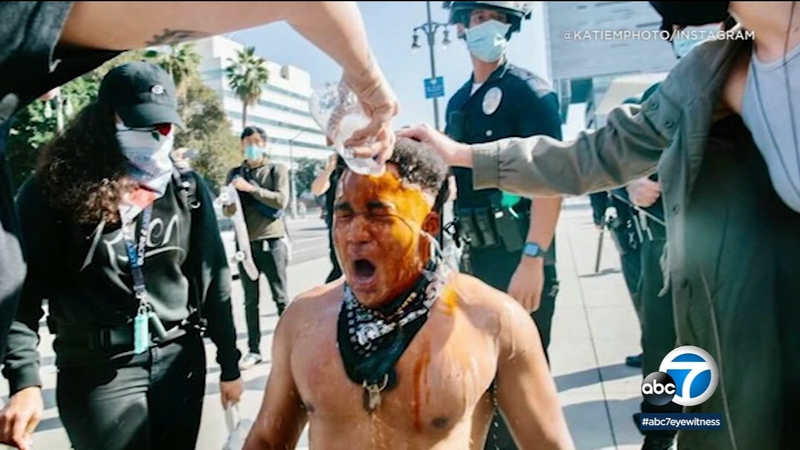 Man attacked by Trump supporters in DTLA speaks out

DOWNTOWN LOS ANGELES (KABC) -- A man is speaking out after he says he was maced and hit in the face by pro-Donald Trump demonstrators outside Los Angeles City Hall Wednesday.

The agony on Christian Angelo's face is clear to see in photos taken when violence erupted between Trump supporters and counter-protesters that afternoon.

"I'm getting hit by bear mace right here on the right," he recalls. "I didn't do nothing to nobody and I'm getting a face full of bear mace all over my right side."

Angelo turned out that day in support of Black Lives Matter. Angelo says he did cross over into the other crowd, but he didn't expect it to turn so violent.

A small group of President Donald Trump's supporters gathered near City Hall in downtown L.A. Wednesday, following the storming of the Nation's Capitol. LAPD declared the gathering an unlawful assembly, and officials said some people were taken into custody.

He says he ran from the crowd of Trump supporters after he was maced, only to be chased down again.

"Some of them were swinging at me," he said. "I know I got hit many times in the face."

He added that while he was yelling at a group of about 10 people, he got maced.

LAPD officers stood by as his fellow protesters rushed to his aid trying desperately to flush his eyes and face of the chemical.

The woman says the crowd of Trump supporters started to harass her - she was hit in the face and others jumped her.

Angelo says the officers' lack of action against those who attacked him is what has him so upset. He says the entire altercation was likely captured on camera by the surveillance system in the park where the trouble began.

"I'm taking this very personally because I know I'm not going to get any justice for my assault," he said. "If it were the other way around I would be in bars right now."

LAPD says it is investigating an assault during the protest, but it involves a woman getting attacked by the Trump supporters.