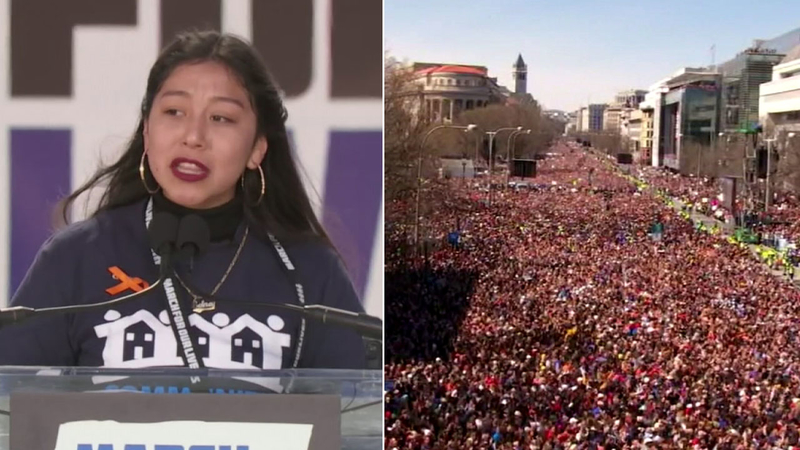 LOS ANGELES (KABC) -- The 17-year-old from South Los Angeles who gained national attention after her impassioned speech at the March for Our Lives rally in Washington D.C. is back home and feeling empowered.

Edna Chavez and the 14 other teen activists who went to D.C. returned Sunday night after taking part in the historic march. Their message - It's time to do something about the gun violence in South L.A.

A young gun control activist from South L.A. stood out as she spoke at the March for Our Lives rally in Washington D.C.

Ready to continue the fight at home, Chavez and the other teen activists say the historic march was a game changer not just for them, but for the battle for stronger gun control.

RELATED: March for Our Lives Los Angeles: Thousands take to the streets

Chavez shared her personal story of loss with the world in an emotional speech about her brother, who was shot and killed, and how common gun violence is in South L.A.

WATCH: Scenes from March for Our Lives events around the country
EMBED More News Videos

See speakers and scenes from March for our Lives rallies around the country.

Chavez said the next step in fighting the epidemic is getting more resources into the communities that need them the most.

Chavez and the other teens say they are committed to fighting for change, saying lives depend on it.

PHOTOS: March for Our Lives signs from events nationwide