Loved ones want a congressional investigation into the murder of Spc. Enrique Roman-Martinez.
KABC 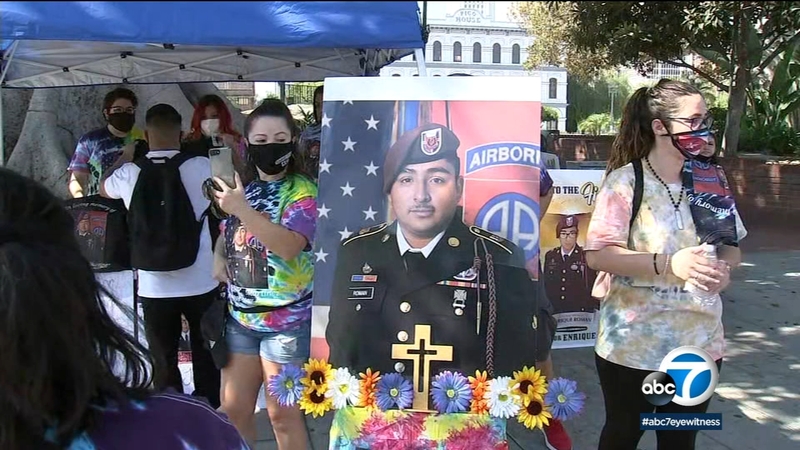 DOWNTOWN LOS ANGELES (KABC) -- Supporters gathered in downtown Los Angeles Sunday to demand justice for a paratrooper from Chino who was murdered in North Carolina.

Loved ones want a congressional investigation into the murder of Spc. Enrique Roman-Martinez.

Supporters on Sunday sold T-shirts and raised funds for awareness. They are asking for the public to get involved and demand an investigation.

Roman-Martinez, an army paratrooper serving in the 82nd Airborne Division, was murdered during a Memorial Day camping trip.

The remains of a soldier from Chino who was killed during a camping trip in North Carolina was laid to rest in Southern California on Saturday.

The 21-year-old and seven fellow soldiers from Fort Bragg were camping on an island on North Carolina's outer banks when he disappeared. Days later his partial remains washed ashore.

So far, there have been no arrests and few answers for the heartbroken family.

Supporters say they will speak up and march until the truth comes out.

"When people enlist to serve and protect this country, we don't expect them to lose their life. They're here to defend us, but who is defending them?" said event organizer Yvett Boizo. "If this could happen to someone serving in the military, imagine what happens to us, the people in the streets."

The names of the other seven witnesses who went on the camping trip have not been revealed.