"We've got to re-examine what we're doing with American taxpayer dollars and ask the question: are we getting the right return on our investment?," the senator said.
KABC 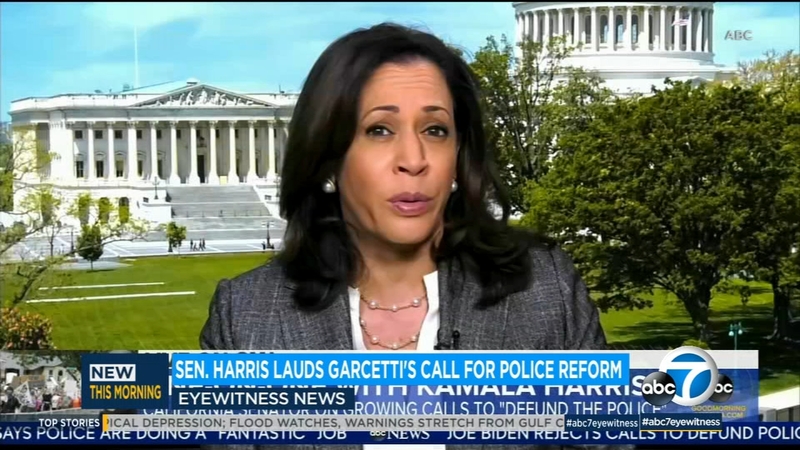 Though Mayor Eric Garcetti has received significant backlash over his proposal to redirect funds earmarked for Los Angeles' police force, California Sen. Kamala Harris is speaking out in favor of the idea.

Garcetti's proposal would invest some $250 million into health care, jobs and "healing" aimed largely at the black community. The union representing LAPD officers fired back at the mayor, labeling him "unstable" and accusing him of political pandering after he referred to "killers" in remarks about the proposed spending change.

In an interview on "Good Morning America," Harris voiced her support for investing in communities, noting that many American cities spend over one-third of their entire budget on policing, while defunding public schools.

"We've got to re-examine what we're doing with American taxpayer dollars and ask the question: are we getting the right return on our investment? Are we actually creating healthy and safe communities?," she said. "That's a legitimate conversation and it requires a really critical evaluation. I applaud Eric Garcetti for doing what he's done."

Harris and other congressional Democrats on Monday unveiled a far-reaching overhaul of police procedures and accountability, a sweeping legislative response to the mass protests denouncing the deaths of black Americans in the hands of law enforcement.

The Justice in Policing Act, the most ambitious law enforcement reform from Congress in years, confronts several aspects of policing that have come under strong criticism, especially as more and more police violence is captured on cellphone video and shared widely across the nation and the world.

The package would limit legal protections for police, create a national database of excessive-force incidents and ban police choke holds, among other changes.

It would revise the federal criminal police misconduct statute to make it easier to prosecute officers who are involved in "reckless" misconduct and it would change "qualified immunity" protections to more broadly enable damage claims against police in lawsuits.

The legislation would ban racial profiling, boost requirements for police body cameras and limit the transfer of military equipment to local jurisdictions.

Overall, the bill seeks to provide greater transparency of police behavior in several ways. For one, it would grant subpoena power to the Justice Department to conduct "pattern and practice" investigations of potential misconduct and help states conduct independent investigations.

And it would create a "National Police Misconduct Registry," a database to try to prevent officers from transferring from one department to another with past misconduct undetected, the draft says.

A long-sought federal anti-lynching bill that has stalled in Congress is included in the package.