Chef Jose Andres' nonprofit, World Central Kitchen, is not only serving meals to 7,000 seniors in Long Beach a week, but also providing jobs at local restaurants amid the coronavirus pandemic.
KABC 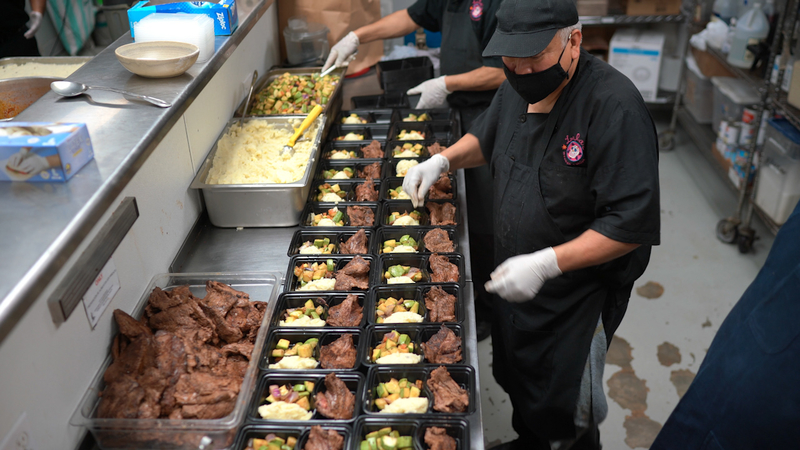 How this non-profit is feeding seniors and creating jobs

LONG BEACH, Calif. (KABC) -- Roxanne's Lounge in the California Heights neighborhood of Long Beach is one of countless restaurants impacted by the coronavirus pandemic across Southern California.

"Shutting doors and having to tell about 40 people that are part of us that we're closing up has been a rollercoaster," said Robert Molina, owner of Roxanne's and distillery Wille's Tin Shop.

Molina was able to keep on some staff at Wille's Tin Shop to produce and sell hand sanitizer, but he had to furlough his staff at Roxanne's.

Eventually, the small business owner took on one or two of his kitchen staff at Roxanne's to handle takeout orders, but everything changed once he got a call from Tank Gonzales at World Central Kitchen.

"Wherever there's a disaster on Earth, World Central Kitchen is there," said Gonzales.

Gonzales owns The Raven and the Wolves, a tattoo shop and fine art gallery in downtown Long Beach. He had volunteered with Michelin-star Chef José Andrés's nonprofit, World Central Kitchen, in the past and was asked to be the Project Lead in Long Beach.

"World Central Kitchen had just developed this new pilot program that was going to fund local restaurants on a per meal basis to prepare meals for whatever the affected community was locally," Gonzales said.

The program launched mid-April and the mission in Long Beach was to feed seniors across the area, from the Long Beach Senior Arts Colony to Little Sisters of the Poor in San Pedro.

"Right now, we're doing 7,000 meals a week," Gonzales said. "The meals are getting delivered right now by our partners at UPS that have donated a truck and a couple of drivers daily to deliver all these meals for free."

Roxanne's, The Ordinarie, Lola's Mexican Cuisine and The Breakfast Bar are restaurants in Long Beach's efforts.

"This program has allowed them to hire back their staff and create not just jobs, but also a mission that the cook staff knows that they're on now," Gonzales said. "They know they're preparing meals for seniors that can't get them otherwise."

Molina has been able to slowly hire back more kitchen staff at Roxanne's. His team is serving more than 1,500 meals a week to a mission church in Compton.

"Just going home and being able to eat and not have to worry about bringing food to the table, it really means a lot," Molina said.

Gonzales said if people want to give back, the best way is through donations.

Gonzales said $10 feeds a senior in Long Beach for a day. For more information, visit their website.