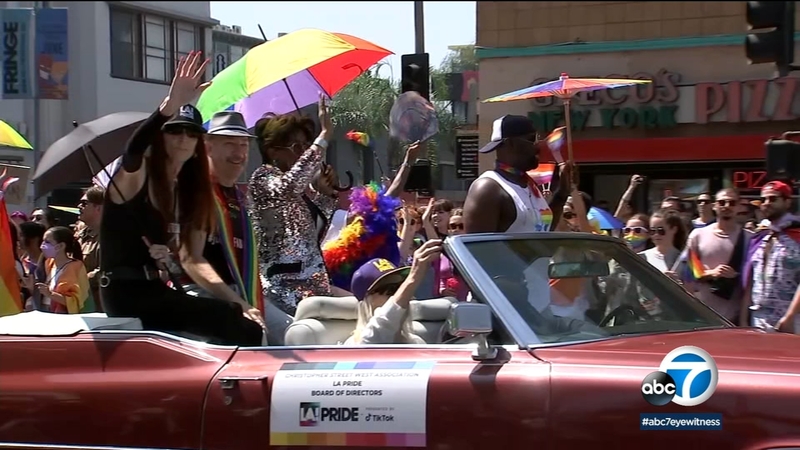 LA Pride Parade returns after 2-year hiatus due to pandemic

This year, it followed a new route through Hollywood where participants shared messages of inclusion, acceptance, and equality.

With a roar of engines, the L.A. Pride Parade kicked off Sunday from Hollywood, with "Motorcycle Contingent for Equality" taking the lead.

"I've been doing this for probably longer than you are old, so this is amazing that all our community comes together," said Sparky with Motorcycle Contingent for Equality. "And it's wonderful you know. I'm so happy right now."

There was no shortage of pride and color in Hollywood. The streets were filled with people ready to release two years of pent-up pride due to COVID-19.

The celebration's location pays tribute to the first-ever gay-permitted parade back in 1970.

"Coming back to Hollywood, this is like a dream come true after 40 years," said L.A. resident Dave Gajda. "You know, we always supported West Hollywood but hey, everything started in Hollywood. It's really where it should be."

Under the theme of "Love Your Pride," the event brought more than 130 community groups, complete with floats, performers and celebrities.

For many in the crowd, it was a chance to reconnect.

Lexi Callister drove in from Arizona to be with her sister.

"It's my sister's first Pride being out so I had to come and support her," Callister said.

"It is the opportunity to be with people who get it, who like, make you feel like you have a community and a home," said L.A. resident Ris Lallatin.

It was certainly a celebration of love, inclusivity and living out proud.

"I am so excited to be out here and to see all these people here because it is literally everybody here," said Jose Malajon of Los Angeles. "All races, all sexual orientations, everybody's here uniting together."

Check out abc7.com/pride for more stories about the LGBTQIA+ community in L.A. and their allies, and share your pride with #abc7eyewitness.