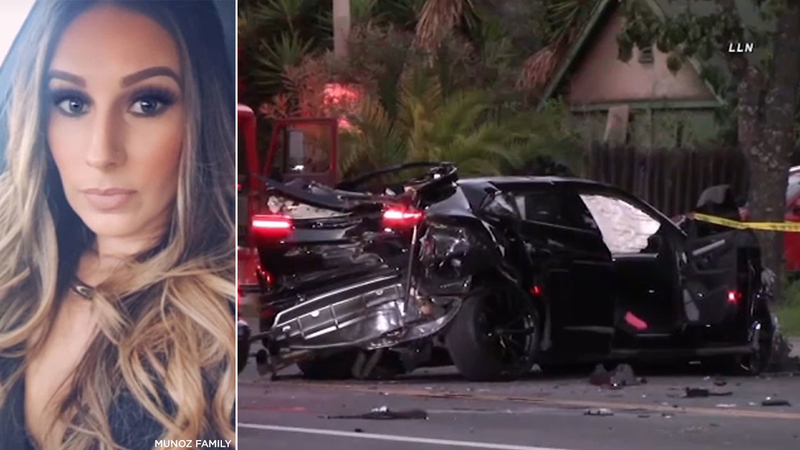 LOS ANGELES (KABC) -- The family of a 32-year-old woman who was killed in a West Los Angeles crash involving a teenager behind the wheel of a Lamborghini SUV will receive a settlement of $18.8 million in the case.

Monique Muñoz was driving home from work on Feb. 17, 2021 when her sedan was struck by a speeding black Lamborghini, authorities said.

In October, Brendan Khuri, the then 17-year-old driver of the Lamborghini, was sentenced to nine months of what was described as a "rigorous juvenile camp" in addition to four years of probation. He had previously admitted to felony vehicular manslaughter in the case.

On Wednesday, lawyers for Muñoz announced what they call "one of the largest settlements in California history for a single plaintiff in a wrongful death case."

"Today is a significant milestone because the Muñoz family can finally get some closure for this horrific tragedy," attorneys said in a statement. "The family faced numerous hurdles from both private insurance companies and the LA District Attorney's office, and experienced the harsh realities of racism and bias against those from underserved communities... Today's settlement is a testament to their efforts and is a step closer to justice."

A teenage driver of a Lamborghini SUV will soon learn his fate during the sentencing phase in connection with a West Los Angeles crash that killed a 32-year-old woman.

The teen's father, James Khuri, has apologized to Muñoz's family on social media, offering "my support in any way you will allow me to."

Authorities said the teen had been stopped by Beverly Hills police in October 2020 and November 2020 -- with body-worn video from the two stops indicating that he was cited first for driving 72 mph in a 35-mph zone and then cited for making an "unsafe start" by accelerating very fast, with that officer deciding to impound the vehicle.

In both instances, the officers noted that the teen was supposed to be driving with someone who was at least 25 under the rules of a learner's permit.

Attorneys for Muñoz's family noted that the fatal crash occurred just three months after the teen's Lamborghini had been impounded.

During the Juvenile Court hearing, Judge Sabina A. Helton noted that the teen was driving at high speed in a 35-mph zone at the time of the collision.

"The tragedy that occurred on that day was a long time in the making ...," Helton said, calling it an "avoidable accident."

Helton said the boy had been given a "very high-performance car" and that his parents were aware he had received two citations in 2020 from Beverly Hills police including one in which the vehicle was impounded and subsequently returned to the teen.