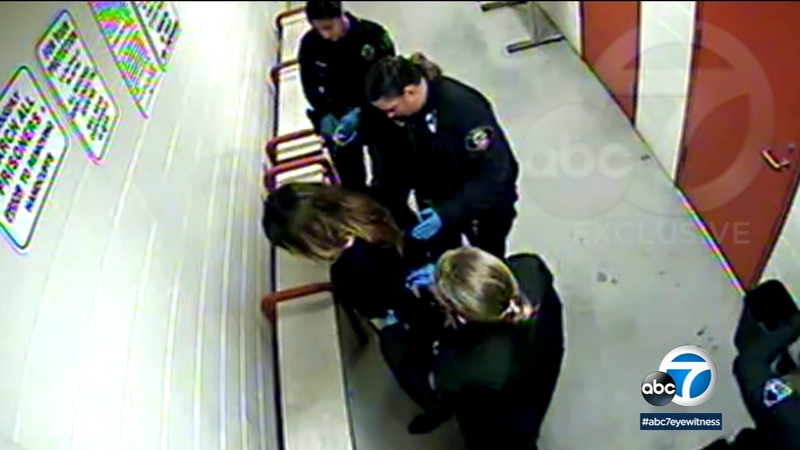 LOS ANGELES (KABC) -- A series of DUI and other alcohol-related incidents involving drunk officers is raising attention at the Los Angeles Police Department.

Commander Nicole Mehringer was a passenger in her city-owned vehicle and appears to be slumped down on the floor of the front seat. Kelly, who appears to be passed out, is at the wheel with his seat belt on.

Mehringer was detained that night and later charged with one misdemeanor count of public intoxication. Kelly was arrested and charged with misdemeanor driving under the influence. Both have pleaded not guilty.

Mehringer was fired and is fighting to get her job back. Kelly was demoted one rank, but kept his job.

"It's embarrassing when you see members of our organization that are arrested for DUI," said LAPD Chief Michel Moore. "This last year, 18 individuals were arrested of a workforce of 13,000."

The incidents include Commander Jeff Nolte. Panicked motorists reported reckless driving to 911 dispatch. A tire had blown out, and he was driving on the rim.

He later abandoned the police-issued vehicle in Carson. Nolte was demoted to Captain, but allowed to keep his job.

Officer Edgar Verduzco was charged with vehicular manslaughter after slamming into a family of three, killing them all.

"Are they held to a higher standard? Yes. Because they have a badge and a gun, and we should expect them to be the examples of behavior," Garcetti said.

The department has an Alcohol Prevention Unit. Officers who have struggled with alcoholism have also reached out to fellow officers in need of help. Eyewitness News obtained an internal video in which they share their testimonials.

"I went to hell and back for 10, 11 years in this department struggling with the alcoholism issue," said one recovering officer.
Moore said the department stresses awareness and prevention. But there is also the threat of discipline.

"Most embarrassing in this last year is that I've had two high-ranking officials that have engaged in this and the consequences will be severe," Moore said.

Some officers allege that there is a double standard in discipline. Mehringer is taking legal action, claiming gender bias.

She was terminated. Male officers kept their jobs.

LAPD reports six DUI-related arrests so far in 2019 and that overall, the numbers are down 50 percent from five years ago.