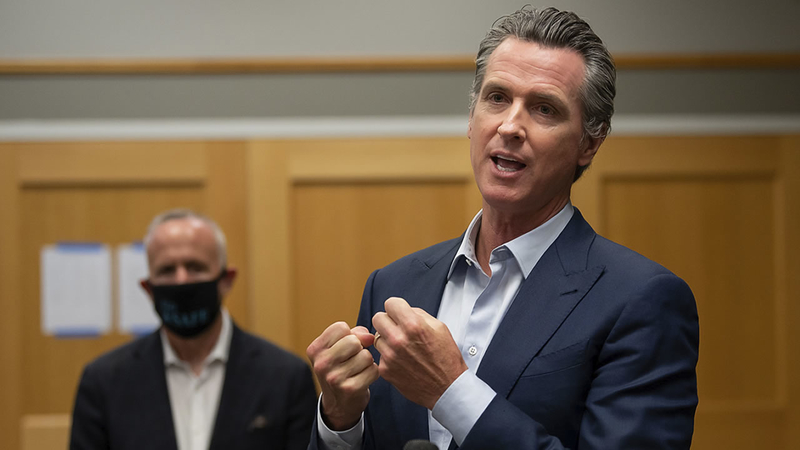 It's about to happen again - a recall election for a California governor. So is Gov. Gavin Newsom really in danger of losing his job? Latino voters will likely have a major impact, experts say.

Latino voters turned out in larger numbers in recent elections.

"Our research showed that more Latinos in California cast a ballot in the 2020 presidential election than ever before," said founder of the UCLA Latino Politics and Policy Initiative, Sonja Diaz.

Now, a recall election approaches. Historically, turnout is lower during a special election.

"Latinos have a smaller turnout as do Asian Americans. So, I expect that to be the case. Nonetheless, Latinos will be about one-fifth of all the voters in this recall election," said professor and director of the Center for the Study of Los Angeles at Loyola Marymount University, Fernando Guerra.

One recent poll found that 44.5% of Latinos would vote for Newsom to be recalled.

The effort to recall Governor Gavin Newsom has submitted enough verified signatures to qualify for a recall election, according to an update from the California Secretary of State's office.

"I don't think the polls are going to be very helpful around October and November, because the real question will be, 'Are you going to vote?'" said executive director of the Pat Brown Institute at Cal State L.A., Raphael Sonenshein.

"This recall is really about a referendum of how we reopen; how our elected leaders including at the top, the governor, is able to ensure that people are having access to things to keep them not only safe, but making sure the world's fifth largest economy can continue to thrive," Diaz said.

"The Latino vote is a very critical unknown going into this recall election because the Latino community has been hit so hard in so many different ways, both health care but also economically," said Sonenshein.

"It's important understand that there's no Latino vote per se, but there's a lot of Latino voters," said Madrid.

"From an immigrant rights organization, we believe that this recall is dangerous," said Angelica Salas, executive director of the Coalition for Humane Immigrant Rights (CHIRLA.)

The petition filed in February of 2020, led by a retired sheriff sergeant, listed several grounds for a recall, from high taxes to homelessness rates, and stated that laws Newsom endorsed "favor foreign nationals in our country illegally over that of our own citizens," and that he "has imposed sanctuary state status and fails to enforce immigration laws."

Salas said it's crucial to understand the motivations behind the recall and not to take anything for granted.

"Many voters were not around in our last recall," she said. "But I want to remind them that what we saw immediately after the recall, was, you know, the taking away of rights for immigrants, including taking away driver's licenses," she said.

MORE | Schwarzenegger weighs in on CA recall, says 'anyone has a chance'
EMBED More News Videos

Former Governor Arnold Schwarzenegger is not discounting Caitlyn Jenner's entry into the race to replace Governor Gavin Newsom in a California recall.

There's different perspectives on how a Democrat and/or Latino candidate could shake up the race.

"High profile Latino, Latino Democrat, especially," Madrid said. "If that happens, I think it's, you know, all bets are off."

Professor Guerra doesn't think that would make a difference given Newsom's current lead. But, there's a caveat: "The economy may not rebound. There could be out of control wildfires," he said. "I'm of the position that there should be a consensus Democrat on the ballot, just in case Newsom implodes."

"It's really important to understand the might and the potential of two demographic groups: Asian Americans and Latinos. Both are youthful. So, every year we have new Latino and Asian American Californians who are eligible to vote," Diaz said, calling it an opportunity to encourage those voters to cast a ballot during an off-election year.

"Because both groups were consequential in determining not only who occupied the White House, but control the U.S. Senate," she said.

The impact of grassroots and civic engagement now, will carry into upcoming races.

"It's not about a recall, when in 2022, we will have midterm elections. There will be statewide constitutional officers running for re-election. And there will also be important congressional districts that have been flipping over the last two election cycles," Diaz said.