Jordyn Poulter, who won the gold medal during last summer's Olympic Games in Tokyo, said it was taken from her car.
KABC
By Rob McMillan 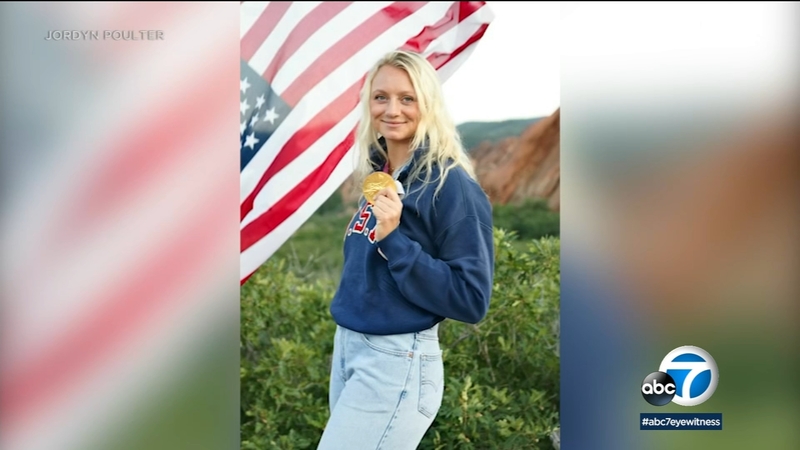 ANAHEIM, Calif. (KABC) -- It's one thing to lose a passport or a cell phone, but to lose an Olympic gold medal is completely different.

"My gold medal was taken out of my car," said U.S. volleyball player and Olympic gold medalist Jordyn Poulter. "My car was parked in my garage where I'm staying, a two-car garage. The garage was open and my bag with my passport and medal were taken from my car."

Since that time, she's taken her gold medal with her practically everywhere she's been.

"We live this crazy life of living so many different places. So many of us play overseas, then go home, then come out here and train," said Pouler. "So I keep the medal on me [to show] friends and family I haven't seen in a while, or just people in the community who want to see the medal. Everyone feels connected to it when they meet an Olympian, and it's such a cool thing to share with people."

The theft happened on Wednesday, May 25, in Anaheim at the property where Poulter is currently living.

She said when she entered her vehicle, she noticed the center console was open and her gold medal removed, along with a bag containing other items.

"I think my initial reaction was, 'Why didn't I close the garage door?' It's such an unfortunate bummer, because my initial thought is never thinking the worst of what would happen. But things like this do happen, and it's unfortunate. It'll make you learn really quickly."

Anaheim police are investigating the case.

They're hopeful that if the thief attempts to sell the medal at a pawn shop or online, anyone who sees it will call detectives.

"To try and sell something like that in a pawn shop, that would be something I would hope a pawn shop would alert authorities immediately," said Anaheim PD Sgt. Jacob Gallacher. "It is such a unique item."

Poulter was asked if she had a message for the person or persons who stole her gold medal.

"One, it's not pure gold. So, if you try to melt it down, it's not going to get you very far," she said. "The inside is made of recycled computer parts, and then plated, and it's not worth much in that sense, and I don't think it has as much sentimental value as it does to me."

Of course, given the tragic events earlier this week where at least 21 people were killed in a shooting at an elementary school in Uvalde, Texas, Poulter said it's easy to keep things in perspective.

Anyone with information is urged to contact the Anaheim Police Department.