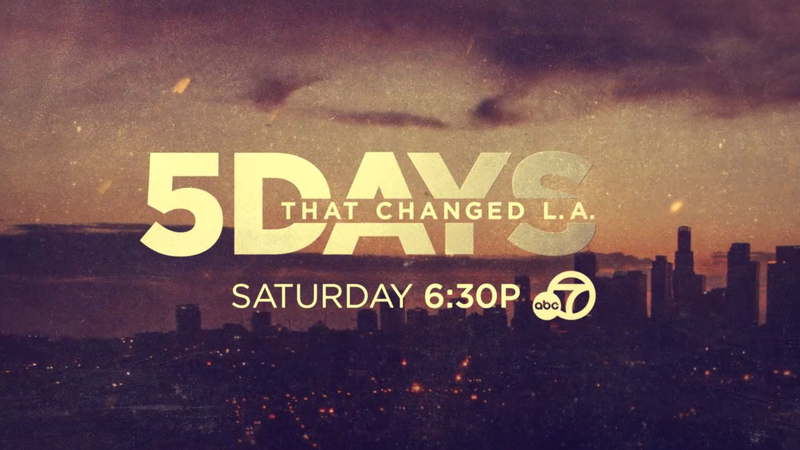 5 Days that Changed LA: 1992 events that ignited fury across city

LOS ANGELES (KABC) -- Thirty years ago, Los Angeles erupted in anger after four LAPD officers were found not guilty of the brutal beating of Rodney King after a high-speed chase.

Fury over the acquittals quickly spilled onto the streets, leading to five days of civil unrest - looting, killings and thousands of fires that left parts of Los Angeles looking more like a war zone.

The events of 1992 ignited a national conversation about racial and economic injustice and police use of force that continues today.

We explore the impact of the unrest through the people behind the largest civil disturbance in American history and examine if changes since then to policing have been enough.

Watch the special, "5 Days that Changed L.A." wherever you stream ABC7.

Policing has changed in many ways since the L.A. Riots, and a shining example of that is the LAPD's "Community Safety Partnership," transforming young lives in some of L.A.'s poorest neighborhoods. ABC7's Marc Brown takes a closer look.

Leaders in the Black and Korean American communities joined family members of Rodney King and Latasha Harlins to urge unity among all Angelenos as the city recognizes the 30-year anniversary of the L.A. uprising.

Thirty years ago next week, L.A. erupted in anger after the acquittals of four LAPD officers who beat Rodney King. King's daughter Lora reflects on what she remembers, what's changed and what hasn't.

Vacant for decades after being destroyed in the 1992 L.A. uprising, a new project at the intersection of Vermont-Manchester hopes to turn the property into a cornerstone for the community.

The events of April and May of 1992 still cast a dark shadow over Los Angeles. But was it a riot? An uprising? Rebellion? Civil unrest?