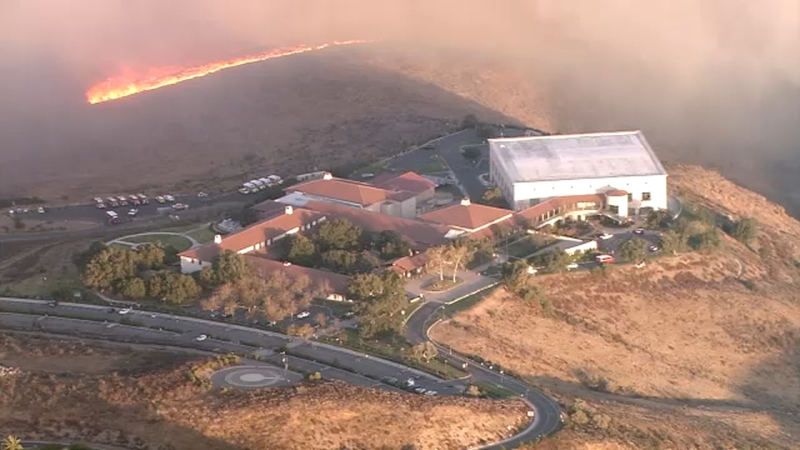 SIMI VALLEY, Calif. (KABC) -- All mandatory evacuation orders were lifted Thursday for a vegetation fire that sent thousands fleeing and burned nearly up to the walls of the Ronald Reagan Presidential Library in Simi Valley.

The fast-moving blaze grew to 1,723 acres one day after strong Santa Ana winds drove more than a dozen wildfires across California.

Fire crews worked through the night to ensure the fire didn't re-erupt after exploding after 6 a.m. Wednesday near the 200 block of West Los Angeles Avenue. The blaze, dubbed the Easy Fire, was 10% contained as of 11 a.m. Thursday. The Ventura County Fire Department hopes to have the fire 50% contained by Thursday night.

Cal Fire said the fire was 60% contained by the end of Thursday.

Homes in nearby residential neighborhoods were immediately threatened by the flames, even after winds initially seemed to be blowing the fire in a direction away from houses.

Hours later, the Ventura County fire said 6,500 homes were in danger. One structure was destroyed. More than 1,000 firefighters worked to battle the flames.

About 30,000 people under mandatory evacuation orders were allowed to return home more than 24 hours after the blaze erupted. Officials said re-population was being conducted by neighborhood.

Residents said they were relieved to see their homes intact after a hectic morning the day before as they rushed to safety.

"The cops came over here and told us to leave, so we took the 118 to Topanga all the way around," resident Mike Smith said. "The kids got out of school and we ended up staying in a hotel in Thousand Oaks for the night, and we just got back this morning. Luckily, everything's OK, but the hills are all black-brown, so it's a little sketchy."

Firefighters also raced to protect the Reagan Library as a thin wall of flames approached from a nearby hillside. The facility, which used an unusual precautionary measure, remained closed Thursday.

"We actually worked with the Ventura County Fire Department in May and they bring out hundreds of goats to our property," said Melissa Giller, a spokeswoman for the library. "The goats eat all of the brush around the entire property creating a fire perimeter."

The Easy Fire that started around 6 a.m. in the SImi Valley this morning is inching closer to the Ronald Reagan Presidential Library.

Ventura County Fire Chief Mark Lorenzen said one of the biggest challenges was stopping the fire from jumping from the east side of Highway 23 to the other side. The strong winds did push the flames to the other side of the freeway, but firefighters were able to stop them from advancing further.

"Firefighters aggressively stood there and battled the flames," Lorenzen said.

Santa Ana winds were expected to taper off by Thursday night, with a red flag warning expiring at 6 p.m.