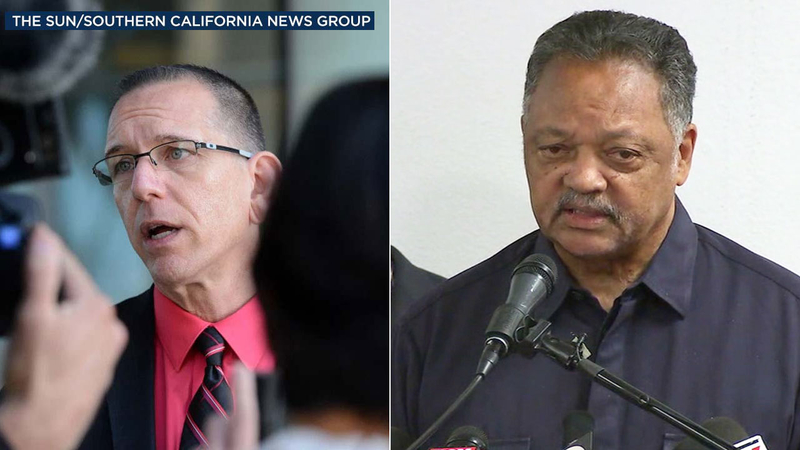 "Michael Selyem must not be suspended, he must be disbarred. Every case he's had must be under review," Jackson, alongside a group of ministers, told members of the press during the 11 a.m. press conference at New Hope Missionary Baptist Church in San Bernardino.

Deputy district attorney Michael Selyem is accused of publishing several offensive posts on social media accounts that have now been deleted, including one about Rep. Maxine Waters.

"To have a guy like this in power with a law degree, and the power to target, detain and arrest people -- he should be stripped of that authority. Everybody he's touched, he's tainted. That's why he should be disbarred and never have this job again," Jackson said.

Selyem has been placed on administrative leave pending the conclusion of a formal investigation, which could result in disciplinary action up to termination, said San Bernardino County District Attorney Mike Ramos at a Monday press conference.

"On June 28, 2018 we received information regarding negative comments posted online by one of our prosecutors. At that time, we took immediate steps to initiate a personnel investigation," Ramos said. " The San Bernardino County D.A.'s office does not condone hate, discrimination or incitement of violence."
EMBED More News Videos

Later in the afternoon, Jackson took his concerns to the district attorney's office personally.

"We made our case to an official of the office, but we're going to have another meeting with them next week," he said.

At the press conference, Jackson added that across the nation, not just in this case, there is "too much violence, ignorance, hatred and fear."

A list of demands was also read by the San Bernardino branch of the NAACP on Thursday, including a call for the "immediate termination" of Selyem, "not a resignation, no suspension...no 'vacation with pay.'"

They also called for the immediate review of every case Selyem has handled in the 12 years he's served as a prosecutor.

"We also call for an injunction on all gang enhancements because we cannot trust the integrity of the department with this guy as the lead," a member said.

The list of demands also included that every prosecutor in the department participate in implicit bias training.