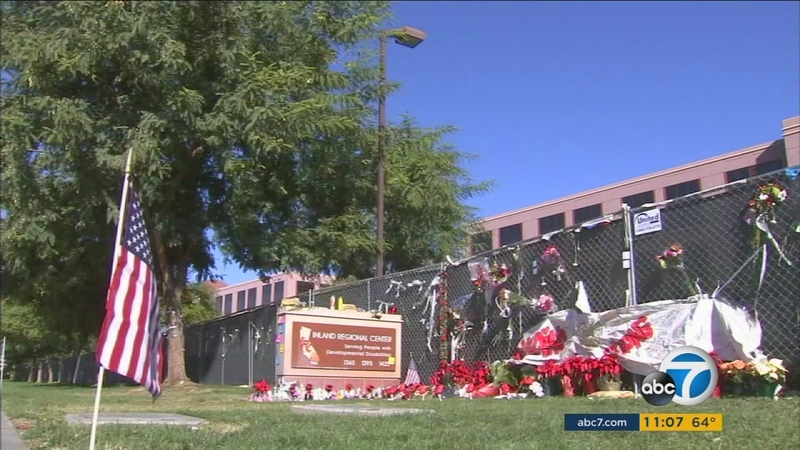 Guards checked identification badges as nearly all of the 608 workers returned to the social service center in the 1300 block of Waterman Avenue.

Since the attack, few employees of the center that serves autistic children and mentally disabled adults have gone to the office, other than for brief visits to gather personal belongings.

Many returning Monday were among those who heard the gunfire, took shelter in their offices and were evacuated by law enforcement. The terror and the uncertainty of that day likely still fresh in their minds as it is for so many in the San Bernardino community.

"Just passing that wall, the fence, everybody put their mementos up on there. You watch TV every day, but you never think it'll happen in your backyard," said Leo Diaz in tears.

On Dec. 2, Syed Farook, 28, and his wife Tashfeen Malik, 29, entered the IRC where a holiday banquet was being held for Farook's colleagues with the San Bernardino County Department of Health and opened fired. The couple killed 14 people and injured 22 others.

Officials said security has been strengthened and they are confident the site is safe.

"In recognizing what we went through on Dec. 2, our buildings are safe," said Lavinia Johnson, the center's executive director. "Everything inside looks as it did at the time that we left it. Nothing has changed. Staff will be going to their offices and everything will be just as they left them in December."

Johnson said crisis counselors are available for all employees but no visitors are allowed.

"It's scary, really scary, but we as Americans just have to face what's going on and try to move on," said Melvin Anderson, who helps transport the center's clients. "We've got to pull ourselves together, and we've got to go on."

The conference building where Farook and his wife carried out their attack will remain closed indefinitely, and the chain-link fence around the IRC will remain up with a security guard at every entrance.

The center is planning to make a permanent memorial for the victims and their families but right now say they need to heal.

"Most of us are relieved to be back at work. We want to continue with the normalcy, and we miss each other very much," Johnson said. "We want to ensure that our staff feels safe and secure as they work in their offices."

A memorial service for the San Bernardino shooting victims was held for county employees at the Citizens Business Bank Arena at 2000 E. Ontario Parkway at 2 p.m. PT. The memorial was only open to county employees and invited guests. Gov. Jerry Brown and Attorney General Kamala D. Harris were in attendance.