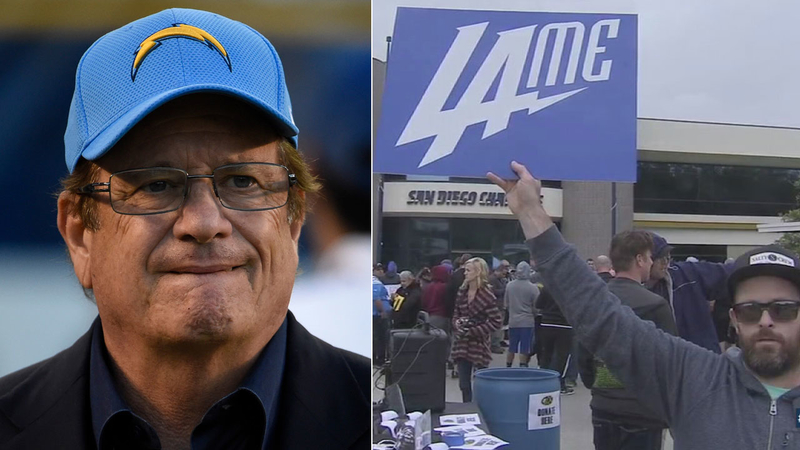 SAN DIEGO, Calif. (KABC) -- The owner of the Chargers on Thursday announced plans to move the NFL team from San Diego to Los Angeles, prompting a variety of responses in each city.

In a letter posted on social media, Dean Spanos noted that San Diego has been the franchise's home for 56 years. "It will always be part of our identity," he continued, "and my family and I have nothing but gratitude and appreciation for the support and passion our fans have shared with us over the years."

"But today, we turn the page and begin an exciting era as the Los Angeles Chargers," Spanos wrote.

The team is expected to relocate in time for the 2017 NFL season.

Thursday's announcement, made just three days before a Jan. 15 decision deadline imposed by the NFL, was accompanied by the unveiling of a new Los Angeles Chargers logo. The "LA" graphic features white letters, one marked by a lightning bolt, on a blue background.

Sources told ESPN the insignia was a "working logo" that had not yet been approved by the National Football League.

News of the move was met with disappointment and disgust by some fans in San Diego. A small crowd gathered at Chargers Park, where they threw team apparel and flags onto a pile on the ground.

Someone in the crowd set fire to the memorabilia. At least one person was arrested.


One man said the Chargers "have been a part of my family for 50 years."

"Go to L.A. Have a good time," he said, addressing the team with disdain. "Take your family with you. Get out of my city."

"This is real sad because, you know what, that's the only team we know," the fan added. "We come to support it. Some of us work two jobs to go to a couple of games a year. For you to just pick up and leave -- that's sad."

San Diego Mayor Kevin Faulconer had this to say about the move: "We live in a great city and we will move forward. San Diego didn't lose the Chargers. The Chargers lost San Diego."

The Chargers had recently failed in efforts to obtain public financing to help pay for a new stadium in San Diego. They are expected to play their games at the 30,000-seat capacity StubHub center in Carson until a new $2.6 billion stadium is constructed in Inglewood to house both them and the Rams by 2019.

"It was time to make the decision we did," Spanos said in an interview after landing at Los Angeles International Airport and meeting with Inglewood Mayor James Butts Jr. "We're looking forward to getting started, get our business going up here."

"We welcome the Chargers and look forward to working with them to provide NFL fans in the region and throughout the world with an unparalleled experience at the LA Stadium and Entertainment District at Hollywood Park," Kroenke said. "Our mission is to create a year-round global sports and entertainment destination and this is another important step in achieving that goal."

A letter from Dean Spanos pic.twitter.com/rTNIvrsN1A

San Diego Chargers fans were outraged to learn of the team's move to Los Angeles.

Here's my statement on the Chargers' decision to leave San Diego: pic.twitter.com/7LEf3dMayG