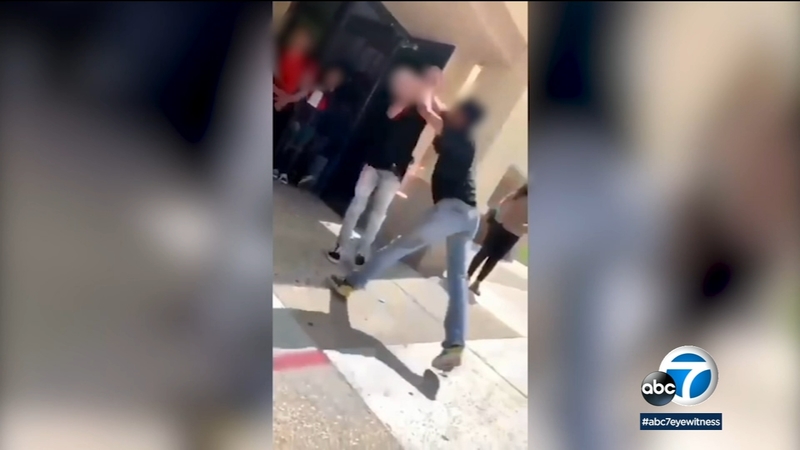 MORENO VALLEY, Calif. (KABC) -- Parents demanded answers from school administrators during a packed meeting in Moreno Valley Wednesday after a fight at a middle school left a 13-year-old hospitalized.

Cell phone video of the incident at Landmark Middle School shows on Monday one suspect appearing to confront the victim and punch him in the head. A second boy also allegedly strikes the boy. The victim then appears to hit his head on a pillar and drop to the ground. The first allegedly hits the boy a second time before running away.

The victim suffered major injuries and was transported to a local hospital where he remained in critical condition Thursday.

The 13-year-old suspects were arrested for assault likely to produce great bodily injury and booked into Riverside County Juvenile Hall, according to the Riverside County Sheriff's Department.

Parents asked whether the school knew the victim was being bullied.

"We are continuing to gather information because this is a major piece," Landmark Middle School principal Scott Walker said.

Frustrated parents interrupted him, claiming their questions were not being answered.

"I'm not trying to dance around it, but I don't have all the facts in front of me," Walker said.

School administrators said they were not able to provide certain details because the incident was still under investigation.

Some parents said they're worried about their own children's safety and wonder why security wasn't on hand.

In March, sheriff's deputies had to fire pepper balls to break up a fight on campus involving 50 students. No serious injuries were reported.

After the latest assault, students have placed banners at the school that read "No more violence."

Some say they hope the school district does more to deal with bullying.

"Bullying is not good...it lead to suicide and fights. It's just sad," student Angelina Rios said.

The school district said it hired extra behavioral specialists to try to assist students who are having problems to try to prevent them from lashing out at others. The district added it plans to hold future meetings to try to do more problem-solving and come up with more solutions.

It is not yet clear what led to the fight. An investigation is ongoing.