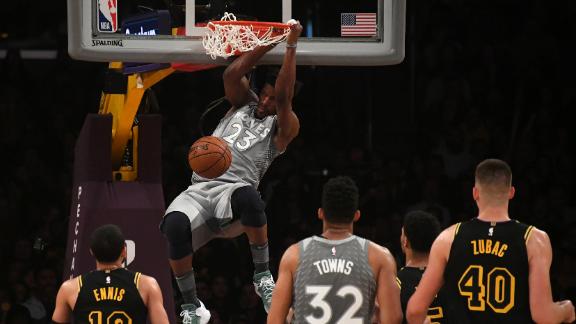 LOS ANGELES -- After seeing a 20-point cushion drop to 15 with just under seven minutes left in the game, an upset Tom Thibodeau called for timeout.

With so much at stake in this heated Western Conference playoff race, the Minnesota Timberwolves coach wasn't leaving anything to chance.

Fortunately for Thibodeau and the Timberwolves, they had Jimmy Butler back, and the injury-ravaged Lakers lost yet another body when Kyle Kuzma suffered a mild ankle sprain and was ruled out in the third quarter. With Butler looking good, the Timberwolves dispatched the Lakers 113-96 to snap a two-game losing streak.

Minnesota improved to 45-35 and is clinging to a half-game lead over the Denver Nuggets for the eighth and final spot in the West playoff race. The Wolves have only home games left against the Memphis Grizzlies and Denver.

After missing 17 straight games following surgery to repair a meniscus in his knee, Butler made seven of 10 field goals and scored 18 points in 23 minutes. About the only place where Butler showed some rust was his at the foul line, as the 86.5 percent free throw shooter missed four of eight attempts.

Jeff Teague had 25 points and eight assists, and Karl-Anthony Towns put up 14 points and 11 rebounds after a slow start. Taj Gibson added 18 points and 10 rebounds for the Wolves. All five Wolves starters scored in double figures.

Julius Randle had 20 points and 10 rebounds for the Lakers, who are reeling from injuries. The Lakers, already playing without Lonzo Ball (knee contusion), Brandon Ingram (concussion) and Isaiah Thomas (hip), lost Kuzma in the third quarter after he tried to play through a mild sprained ankle.

As for Minnesota, Thibodeau could not have gotten Butler back at a better time with a playoff spot hanging in the balance.

"Probably the biggest thing is the toughness," Thibodeau said of what the team missed since Butler injured his knee in late February. "When you look at plays at the end of games, those are his plays. He's the guy that is coming up with every big rebound, loose ball, whatever the game needs he provides.

"You don't replace a guy like that individually. You have to do it collectively, and I thought for the most part our guys did that. Our guys fought like crazy to keep us in position."